en.infoglobe.cz » Austria: Mariazell - The Locality Is Not Famous Shrine Only

Mariazell is situated in Upper Styria, in an altitude of 1344 metres above sea level. The town itself is really small. The city is formed with a couple of streets and a square, where shrine Basilica, with very interesting and particular front facade is dominating, between Baroque towers with cupolas, a Gothic tower is placed. 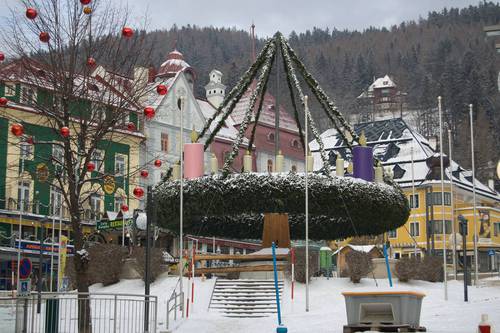 Several well marked pilgrimage routes lead to the town. The pilgrims could choice the length according to their health condition stage. So, for example, the route from Vienna, Austrian capital, is more than 100 kilometres long, starting from Vienna-Rodaun suburb, leading through south part of Vienna Forest, via localities of Mayerling, Kleinmariazell, Araburg. Kieneck and Halltal-Valley. Along the route, big number of accommodation as well as refreshment places of various categories are to be found. The way is bordered with marvellous nature. Nevertheless, your attention will be drawn to typical Austrian countryside houses and mansions, including its numerous nutmegs, where you can follow the cows with long fur (it is unusual fact for us) pasturing on meadows. So, if you decide to visit this picturesque town, having in mind another purpose as the pilgrimage (you intend to spend there your unforgettable skiing or enjoy your stay in climatical spa), you do not walk there on foot but use the services of train, bus or your own motor vehicle. From Bratislava, the shortest way leads via Vienna, following Highway A 1 up to the town os St. Poelten, continuing via communities of Annaberg and Josefsberg up to Mariazell. This locality has good train connection, as well. From Vienna, you would be transferred to St.Poelten, where you have the chance to change regional train, going directly to Mariazell. Moreover, the travelling by train is offering numerous outlooks to exquisite views around.

What the legend is informing about?

ording to the legend, the shrine locality of Mariazell was established as follows: In 1157, Abbot Otker from St. Lambrecht, Monastery of Benedictine Order, sent friar Magnus to this region, which was in possession of this Abbey. The monk´s task was to present the respective spirit care and support to local inhabitants. This abbot allowed him, to take with small statue of Virgin Mary (of 48 cms high), carved out of linden wood. However, in the evening of 21st December, the gigantic rock fell down on the way in front of him, so the monk could not continue his pilgrimage ahead. So, Magnus begun to pray Mother Virgin Mary for help. Suddenly, the rock broke and the friar could continue his walk ahead. When he reached his final point, Magnus placed the statue on a stump, built a small penthouse above it (which served as a chapel and a shelter for him at the same time). This „Mary in Cell“ became soon a centre of spirit life there and shortly afterthat, even a target of many pilgrims, and so, the locality got the name of Mariazell.

Mariazell is for Austrian believers, together with marvellous pilgrimage church and merciful altar

of Virgin Mary, their greatest national sanctuary. The Madonna of Mariazell is also named as Magna Mater Austriae (Great Mother of Austria). At present, this holy statue is placed in a chapel, in the centre of Basilica, and it is clothed (all year around) in expensive embroidered clothes. Only twice a year - on 21st December and on 8th September, the statue is presented naked. The shrine church begun to be constructed in 1200. This fact is mentioned on a relief of main entrance into Basilica. The church changed its face several times during centuries of its existence. At first, it was built in Romanesque style, followed later with Gothical style. Today´s actual face of the Basilica comes of 17th century. The building was not sufficient for enormous number of pilgrims, so it was undergone an extensive reconstruction. So, rather simple outside, but majestic five-navies construction with garlands of chapels, was created, abundantly decorated with paintings and stucco. Inside, silver merciful altar is dominating.

Relax in the nature

Except Basilica, you can visit in Mariazell also a museum of trams, Mariazell local railway, regional museum, holy well or beautiful chapel on Zikmund Hill. Direct in city centre, inside one house, you can find a stop of cabin rope railway. You can be transferred, by means of this means of transport, upstairs, to popular winter resort of Mariazeller Burgeralpe. Upper rope railway station is, under favourable weather conditions, suitable starting or termination point of many marked tourist trails. 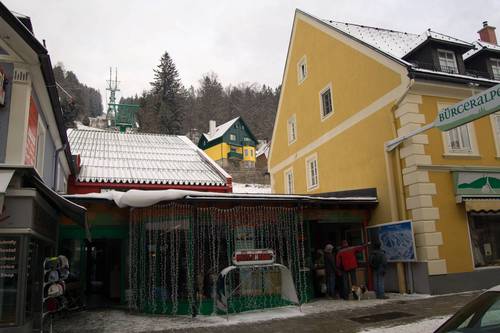 Ski resort Mariazeller Burgeralpe has, despite its rather low altitude, sufficient quantity of snow. Provided there is lack of nature snow, the artificial snowing is secured. The skiers have available eight descent routes, with total length of eleven kilometres. Each skier could find there his suitable lien, the beginners or experienced skiers. The top of the mountain range could be reached by two four-seat  rope railways, one „Poma“ and one „Anchor“. Ski school with children towage and moving belt belong to standard service, which is available. All lovers of ski running, descending or snowboarding could find their ideal place. Moreover, it would be worth to try a drive along 1700 metres long sledge route, with artificial illumination, terminating close to rope-railway station. 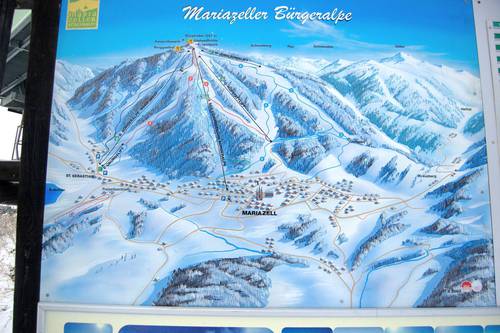 Austria: Skiing in the Alps I – Dachstein West, a Village Type Ski Resort

Published: 31.1.2016
The winter is here but there is not much snow in our country. If you are not satisfied with our pistes covered with artificial snow then go to the Alps.

Winter Season With a Winter Catalogue

Published: 17.1.2013
The winter season is in full swing and we are glad we have prepared for you the fifth interesting catalogue that will, hopefully, inspire and help you with your choosing of the most ideal place for your winter vacation.