The bridge was built according to engineering project of František Mencl and Alois Nový in 1912-1914 to the design of the architects Anthony Balšánek and Joseph Sakař, in cooperation with the architect Mečislav Petrů. Originally should be called by the Crown Prince Rudolf, but at its opening in 1914 was named after Archduke Franz Ferdinand d'Este (1863 - 1914), which had just been assassinated in Sarajevo in 1914. After the establishment of an independent Czech state bridge was renamed in 1920 after the Manes prominent Czech painter Josef Mánes (1820-1871). 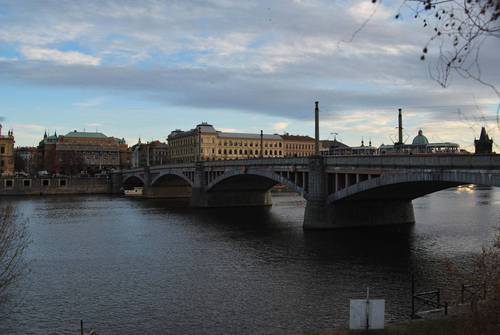 Mánes bridge was built on the place where used to be the ferry, carrying passengers to a fishing village, later it was replaced by Rudolph (or iron) bridge (1868-1869). It still retained the title of Malá Strana waterfront street iron bridge, which originally resulted.

The bridge is made ​​of cement concrete and reinforced concrete was used in part. The bridge is 186,4 meters and width of 15,55 meters. The bridge has 4 arches of diameter 41 meters, its pillars are embedded directly on the rock.

Manes Bridge is one of the buildings, which represents Czech Cubism. The decoration of the bridge worked great Czech sculptor Jan Štursa, Frantisek Bílek and Joseph Mařatka. The bridge pillars you can see the figural friezes, whose theme was the life of the Vltava swimmers. The central pillar of the reliefs F. Bilek, adjacent to the relief of John Štursa created on "beauty and art." Two fountains with spouts are the work of Emanuel Halman. On the part of the Malá Strana characters are placed City Hall and the state. Not far from Jan Palach Square in bridgeheads is a statue of Josef Manes. Another attraction is the symbolism of colours: the bridge consists of three national colours - tricolour - red, white and red.

Currently, the bridge is open to pedestrians, cars and trams.

Published: 27.2.2008
It is a big construction vaulting over Nusle valley for more than 30 years, connecting second and fourth Prague quarters. It has an enormous importance for surface traffic as well as for metro, and forms, at the same time, important main thoroughfare of capital. A concrete colossus makes respect and fear, and it does not matter, if you are upstairs or downstairs in a valley.