There had been a lot of fuss around this small church from the 12th century was. Last time it was in the 1970s when before a reconstruction archeologists revealed many mysteries. Under the church’s floor there were foundations of three older sacral buildings. One of them was a rotund of unusual proportions – the nave was 12,8 wide (it would have been the second largest after St Vitus’ Cathedral). The former rotund was rotund was also paved with paving stones of different motives (from natural to biblical).

No one expected such a discovery at a rural church, all the more so the older rotunda has origin in the 10th century that points on the fact Dolní Chabry was not some unimportant village in that time. 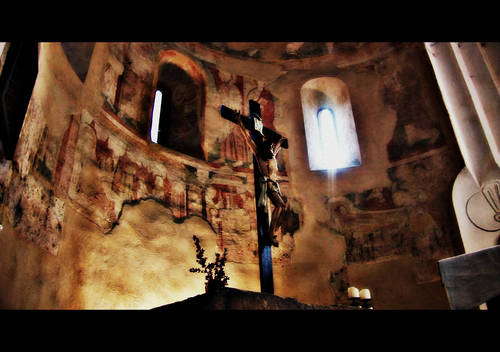 Still, these are just speculations archeologists avoid if their have no evidence that can support them. New excavations in nearby surroundings are planned for the following year. Maybe we will see some new interesting findings that will help us to comprehend this historical mosaic.

Unveiling of foundations of older churches wasn’t the only mystery of Dolní Chabry. In the world of historiography was thrilling when Romanesque paitings were accidentally unveiled in the main apsis of the church. The paintings were often compared to those in St George’s Basilica in Prague. 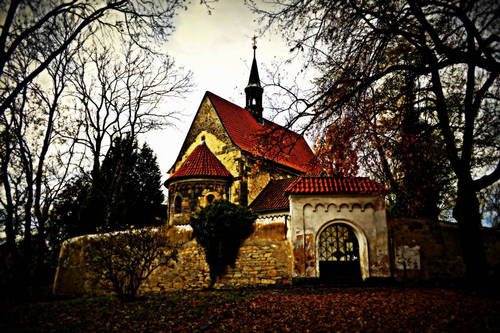 A mysterious sign and the story of bells of Dolní Chabry

It wasn’t easy for archeologists to unravel the meaning of a mysterious Gothic sign on outside wall of the church. They hoped the sign would lead them to answers for many questions. However, when the sign was finally unraveled, their wish came unfulfilled. On the cornerstone of the church is written: “When the heart doesn’t pray, the tongue try hard in vain.” According to the typeface the sign originates in the 15th century. 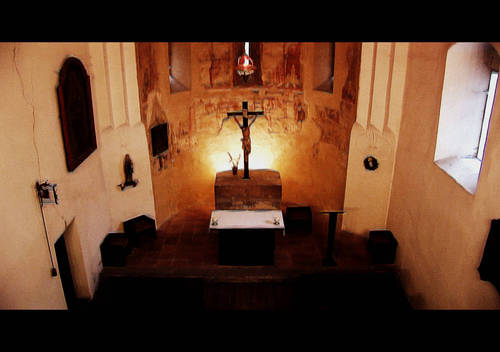 In the church’s vicinity is a wooden underpinned bell tower with two bells. However, there can be as many as three. The smallest bell with a relief of St John the Baptist was made in 1843, and the larger bell was made in 1870. In that time the original work from 1695 of a bellfounder Antonín Josef Schonfedt had to be remade. Probably it happened because of a crack on the bell. The bell we can see today is a work of one few “bellfoundresses” – Anna Bellmann. The bell is covered with a red writing „C/ DOLNÍ CHABRY/PRAHA VENKOV/PRAHA ZÁDUŠ“. The letter C here means the bell belongs to a category of historicaly significant sights. 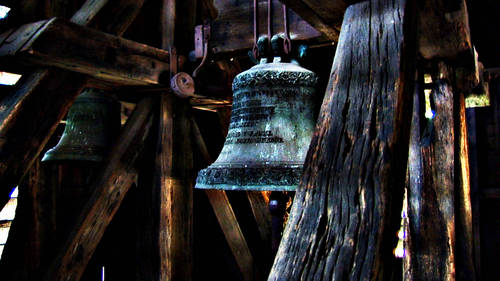 When a war came into the land bells were picked off and their metal was used for something that would be more useful in a war. When the bells in Dolní Chabry were in 1917 about to be recast to weapons only the smallest was taken and, luckily, the other two bells were kept on their place. During the Second World War the bells didn’t escape their fate. In 1942 they were picked off and taken away. However, another coincidence happened. When the war ended the bells were found on Štvanice in Prague and put back where they belong. 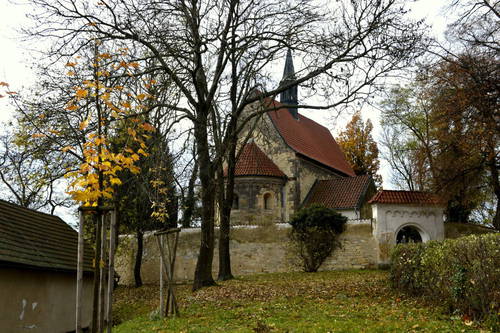