en.infoglobe.cz » Places of interest » CZ, Prague – National Museum: How Did the Reconstruction of the Century Proceed? - VIDEO

Today the old building as if covered with a black filter and supported with scaffolding is empty. Two and a half thousand people helped to move exhibits in last two years. Only popular blue-whale hanging from the ceiling, giraffe, and elephant – both are carefully hid in boxes.

Thousands of cars daily pass by the National Museum. Hořice sandstone, from which its statues are carved, and that was used in construction and decoration must resist not only weather but also exhausts and shakes coming from a highway that cut the Museum off the Wenceslas Square. A view from the roof over a lively metropolis is amazing and also forbidden for a regular visitor, as is a visit to the National Museum in the last two years. 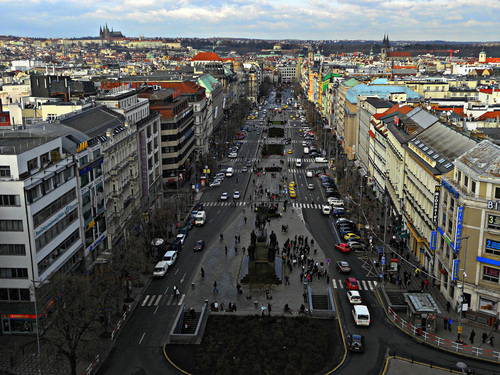 Together with students of Technical University of Liberec we walk through empty spaces of the Museum. We smile when we see an antique stand where a cashier sold tickets. Thanks to experts’ lecture we noticed details we would probably miss. 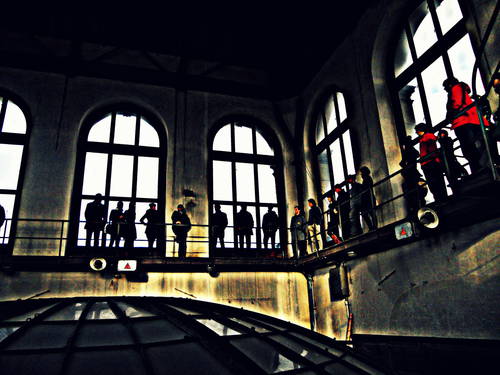 As regular visitors we wouldn’t get on the roof of the Museum that offers an original view over Praue and over flow of cars on the highway under the building. We wouldn’t see statues that are under tough conditions of local air, nor we would see cones sadly lying on a floor of operational spaces in the Museum. We wouldn’t see poor condition of roofs and we wouldn’t get to glass space between a lapidarium and the roof that according to the original plans could be opened so the space could be easily ventilated.

„Empty but not enough,” architects say

It is if the situation took place at doctor’s, where a patient must undress so the doctor could see all his ailments. Here architects still wait for the moment when everything will disappear from the museum, even the showcases designed Josef Schulz, an architect whose plan won that time, because as the only one whose plan counted on lapidarium. The lapidarium is still full of great personas carved in stone. In the wall covered with marble behind a statue we stop by should be saved František Palacký’s brain. 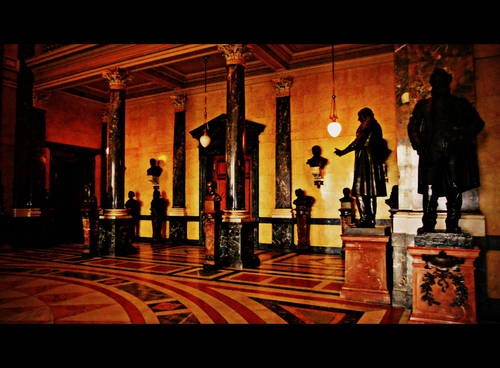 There was and propably will be a discussion of what personalities should be in lapiadrium and what shouldn’t. The professor of architecture humorously motivates his students by showing large empty spaces and noticing that once there could be a statue of one of them.

Present state of the National Museum’s building is, however, not humorous. A patient reconstruction will take several years. According to architects who fill the plan of an investor, in-buildings should disappear and metal plates on roofs should be replaced by original slate covering. 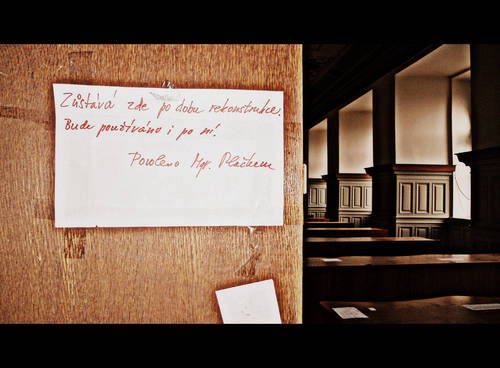 Above-mentioned space above the lapidarium should be changed into a small saloon. Both unutilized courtyards will be roofed. This will make new spaces for exhibition. The National Museum should be connected with the second building of the Museum, former Federal Assembly, in way a visitor wouldn’t notice he/she get from one building to another. A “corridor” that will also serve as a exhibition place will be under Vinohradská Street. The National Museum’s building will have a new technical standard and even its exterior will represent with dignity treasures hidden in its corridors.

Published: 22.1.2008
„Saint Wenceslas, Duke of Bohemia, our Prince, do not allow to perish us now, nor in the future!“. This sentence by Alois Dryák is engraved on base of St.Wenceslas statue on upper part of Wenceslas Square.