The landmark of the Josefov Quarter is Old New Synagogue. The oldest synagogue in Central Europe and one of the most valuable Jewish historical landmarks in the world. It was built in the 1270s. Since then, except the WWII, regular services has been held there. In the same time the Jewish cemetery, Jewish Garden, was founded in New Town, Prague.

New Synagogue can be viewed on the street Maisel no. 18 from Sunday to Thursday. On Friday, it closes an hour before the start of the Sabbath. It begins with sundown Friday and continues all day Saturday. It is Saturday for Jews a symbol of rest, a day, even when not working. Old New Synagogue is but a place for other Jewish rituals. Maybe bar mitzvah is a ceremony in which they are recruited thirteen boys to men. It hosts a Jewish wedding with a reception. 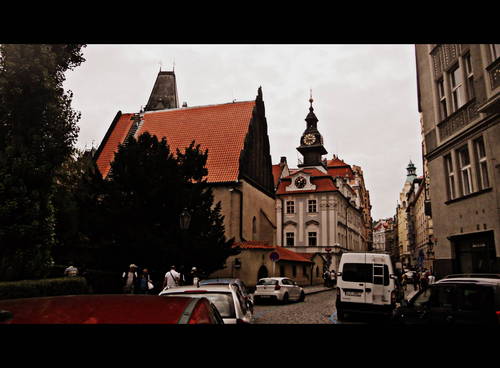 When not serve the purpose for which it was built, thus - worship and other Jewish ceremonies, Old-New Synagogue is open to tourists. And those in the & nbsp; narrow streets of Josefov spinning more than enough. The group, like a swarm of bees, which flock together to his mother, which in our case is replaced with an umbrella or guide flag. In the vicinity of the synagogue can be heard almost all the world's languages. Entrance fee is 200 CZK. If you would like to view but also Synagogue of Jerusalem, get after submitting the ticket discount. 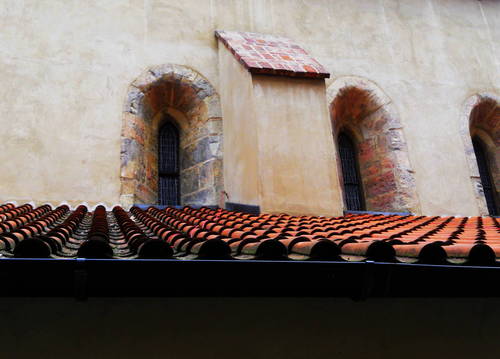 Around the synagogue, which was then called New, was once enough space so that there arose marketplace. The old synagogue stood in the street Dušní. & Nbsp; Old-New Synagogue was preceded by names & nbsp; & nbsp also known, as the New or Great school. Old New Synagogue began to use later. In the surrounding area is said to have first wash clothes. It was built is still on the original rafting yards of the Old Town. So lean enough that you could touch the Vltava river water. Above that today only one must shake their heads, a synagogue in the surrounding area and almost loses Vltava It is today the synagogue dozens, perhaps even a few hundred meters. 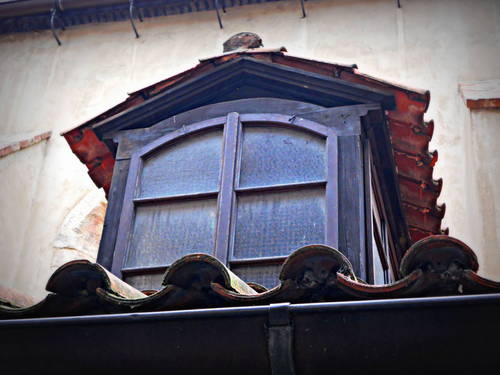 In terms of architecture, it is a real jewel and one of the oldest Gothic buildings in the country. Dark Gothic gabled roof with gables of brick attracts people's views first. The building is surrounded by small additions - hall and galleries for women.

Archaeological surveys carried out in the 60s and 90s of the last century showed Jews living in this area in the 11th century. The Synagogue was declared a national monument in 1995 it manages the Jewish community.

Massive floods hit the Czech Republic and except the Region of Pardubice and Moravia, it affected...