The first mention about the island can be found back in 1355. Originally was named according to Maltese owner, same name which belonged to the monastery church of the Virgin Mary. Later, in the 18th and 19th century, was named as Funkov, Hykyš and Jewish, according to Leopold Jerusalem industrialist who was a member of the Prague Jewish community. Even though the island named Jewish, has been built along its length two-piece lock. For a long time there was a huge storehouse of sports boats. Since 1945, the name of the child survived to this day.

If you go to the island with children, be sure you will find your enjoyment. The fenced property is available: small football pitch with artificial turf, volleyball court, swings, a wading pool, playground for children, run for fans of skateboards and roller skates. North end of the island is surrounded by a stone wall with a circular pergola and staircase leading to the water. At this point there is a column with an allegorical depiction of the river Vltava in the form of bronze statues and other sculptures of their tributaries: Berounka, Sázava, Lužnice and Otava rivers. On the opposite side (south top) of the island will pleasantly greeted by Rusty Anchor restaurant, where a magnificent view of the river and weir. The island is accessible from the left bank of the Vltava - from Janacek's waterfront, near Jirasek Bridge. 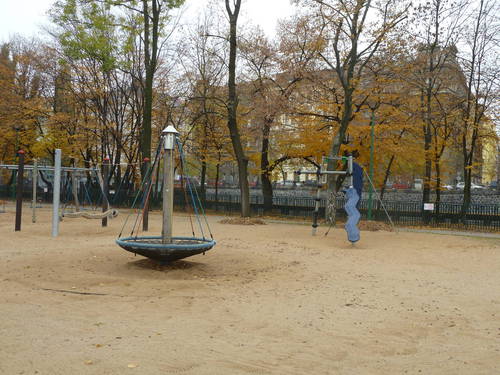