Published: 27.2.2008
It is a big construction vaulting over Nusle valley for more than 30 years, connecting second and fourth Prague quarters. It has an enormous importance for surface traffic as well as for metro, and forms, at the same time, important main thoroughfare of capital. A concrete colossus makes respect and fear, and it does not matter, if you are upstairs or downstairs in a valley.

The history of planes of bridging over of Nusle valley come to 1893, further notices about construction-possibilities are from period of 1st Republic. Anyway, there was no real reason for connection of Pankrác-plain with opposite bank, where there was an extend dwelling place. The idea became actual again during construction of vast Pankrác quarter at bebinning of 1960. Originally, the bridge would serve to traffic line of undesurface-tram, started to construct, similarly as a bridge, in 1965.

As far as the project of undersurface-tram line is concerned, you read more in an article History of Prague Underground, published recently on our web sites. In 1970 was effected memorable loading test. On a bridge, there were placed 66 tanks T55 (weight 37 tons). Further supporting surface tests were made in 1974. The bridge, terminated in 1973, obtained its name according to Klement Gottwald (First Workers´ President).

struction was created according to planes of architects from Project Institution of Traffic and Ingeneering Buildings - Vojtěch Michálek, Stanislav Hubička and Svatopluk Kobr. The base of construction is formed by eccentric concrete and special hardened grate (weight 822 tons), anchored additionally, because of setting of heavy Soviet underground waggon-sets Ečs. These waggons exceeded with its weight (axles´ pressure) originally planned trams T3, or comparatively light metro-waggons R 1 (with axles´pressure of 10 tons approx.) of more than 6 tonns. So, the bridge was not prepared and constructed for such heavy loading. There were doubts that the traffic inside the bridge could not be safe.

From these reasons, there were old Soviet underground waggon- sets Ečs as well as 81-71 sets replaced by Siemens M 1waggon-sets in metro - „C“ line. Anyway, the safety of whole construction was proved, so since 9th May 1974 there was started regular traffic of „C“ underground line between I.P.Pavlova-Station and a Station Vyšehrad, station anchored direct in bridge-construction. 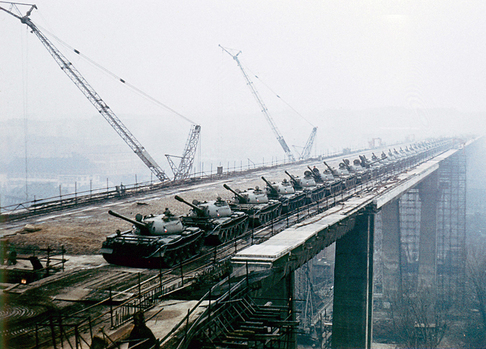 Anyway, the importance for passenger and car traffic was not so big at that time, as there was no connection of North-South Highway from Pankrác part. The importance arose since 30th April 1973, when long distance traffic way was terminated. Since 1990, the bridge changed its name from Gottwald Bridge to Nusle Bridge. In 1997, steel grate was reconstructed, later completely substituted (from the reason of cracks in construction, this made trouble for its integrity and safety of whole construction).

In the future, general reconstruction of the bridge is to be planned, this limits a lot the traffic in the town. Anyway, this reconstruction comes into question, after „D“ line of metro (from Novodvorská to Písnice) will be finished. This enables temporary closing of „C“ line, without total collaps on ways to Jižní město and Brno.

Nusle Bridge has 485 m length and 26,5 m width. It has iron-concrete frame construction and four pillars. Two bridge-fields have a span of 68,5 m and three 115,5 m. The bridge vaults – in average – 42,5 m over Nusle valley. The inside tubus (body) has trapezium´s form and height of nearly 6,5 m. Its wall thickness moves from 30 to 110 cm. This bridge belongs to most biggest in  Czech Republic. In 2000, it was declared as „a construction of century“.

In 1990, it was created - at the edges of bridge-road, along pavements - balustrade of 2,7 m height. This would dissuade persons-self-murders from jumps downstairs. However, by means of jumps downstairs from the bridge, 200-300 persons lost their lives. The fight against this way of life-termination is endless, unfortunately, the depth in this way is chosen by more young people.