After Tecka we get Rio Mayo. For us, it is only a place where we stay over night for the camp is not fully operational yet. If you travel by car, there is always a gas station on the road where you can take a shower. We quickly pack our thing in the morning as the weather has been worsening and we don't want to get wet. Htching a ride take quite long today. Ocassionaly, som local stops yet they mostly travel to some farm within 30 kilometers of distance. There they would let us in wasteland. 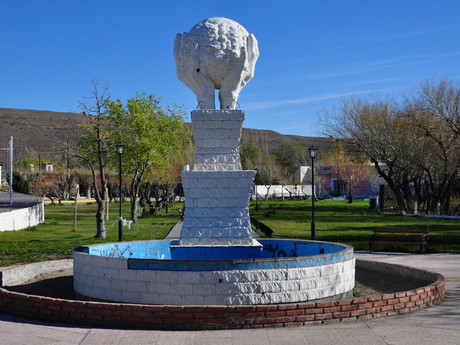 Once we finally get to Perito Moreno town we are completely froen for Ptagonian wind is simply crazy. This endless plane lacks any places where one can hide so the wind got the best out of us.

Fortunately, there is a great and cheap camp in Perito Moreno. Great advantage for us as we will spend there whole two nights. On the following day we run out of luck as we don't manage to stop a single car. A bus is no solution either as none rides on Ruta 40. Buses ride only along the coastline and these are mostly too expensive. So, it is clear as day to us that if we had hitched a car and moved on, we wouldn't get from that next place by bus. This would leave us with the only option of somehow hitchhiking to El Chalten at least. Upon visiting a tourist center, we don't know much more. They adviced us by simply trying to hitchhiking furter on. "You just raise your hand and they take you in." Well, the lady doesn't have an idea that this is no simple thing on Ruta 40. 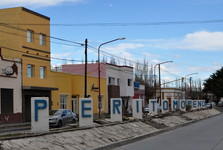 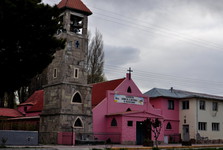 The road further down south changes with every kilometer. Plateau, than hills, and red-tinted mountains. Guanaco lamas run around everwhere. However, we soon realize how hostile the land here is despite beautiful vistas. We see many dead lamas on fences around for they didn't manage to jump over. Strayed labs run behind our car. They most likely lost their mother because of wind which effectively deafens them. A shell of dead armadillo by the road adds to the inhospitable atmosphere wrapping the area. 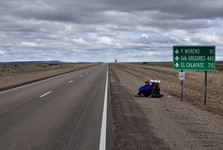 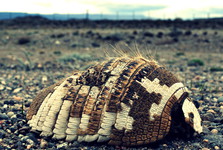 After several hours of trying to hitch a ride, we finally are lucky. Emilia and Horacio, a couple of tourists, get us down to Gobernador Gregores village. On our way, we visit Cueva de las Manos, the cave of hands situated in Cañadón del Río Pinturas. 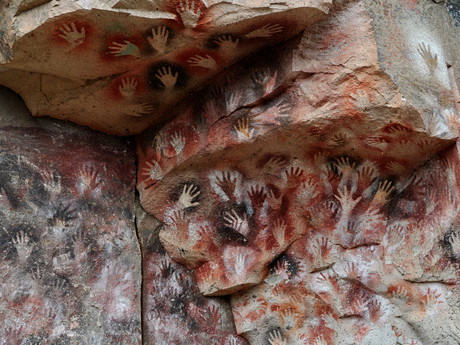 Carlos J. Gradin begane exploring the area in 1973. Then scientific research would begin. It was found out that the first paintings date as far back as to 9300 BCE. Another culture flourished there between 7500 and 3300 BCE. There are hand paintings, hunting sceneries, and other paintings for which variety of techniques were used. For instance paintings by hand first were made by blowing into a thin tube which created a spray effect. Hands on the wall are male, female, and children. Mostly, there are left hands depicted, on some occassions even the right hand. The most interesting is a hand with more than five fingers.

Apart from the cave and the related commentary, you should see a wonderful canyon, home to condors. It is very likely that you would see one. 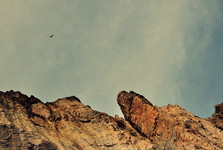 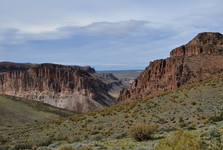 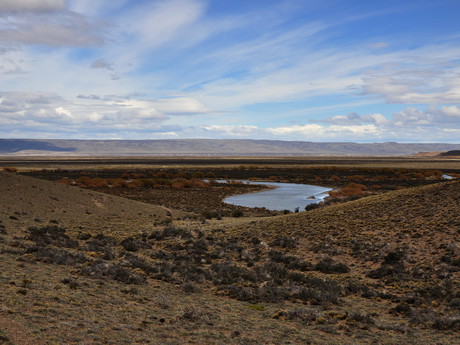 We say our goodbyes to Emilia and Horacio in Gobernador Gregores village. They also give us their contact for they are from Ushua, a plae we are heading to. In the camp, we build a tent to shelter us from wind. Well, for a while at least before we start hitchhiking our way down south. Hopefully we don't freeze and move little bit closer to the end of the world…