Published: 6.9.2019
The State of Missouri, nicknamed the Mother of the West, is home to the Ozar Mountains, culturally rich cities - Kansas City or St. Petersburg. Louis and places deeply associated with American history. In the coming weeks, we'll walk you through the most interesting places in this state.

We will start in the largest city in Kansas City, where half a million people live and a wider agglomeration has over two million people. Kansas City is a relatively young city. It was founded in 1850 and today it is known for its steaks and barbecues, people even call it Barbecue Capital or the capital of barbecue.

If you like jazz, Kansas City is the right place. He is known for his jazz scene, which was once influenced by true legends, such as Jarlie "Bird" Parker or Big Joe Turner. However, there are many good museums and galleries.

First, let's take a look at the National World War I Museum. It is right next to the Liberty Memorial, which is built in the spirit of ancient Egyptian buildings. The memorial was founded in 1928 and is dedicated to all who died during the war. The museum's collections include various letters, films and other historically important items that were collected from 1920 to the present day. 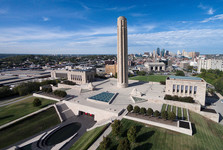 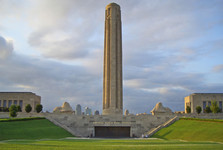 Overall, the museum is trying to bring the war coherently. There are also exhibitions that try to draw you into the topic - for example, a life-size crater model that remained after a barn in France when it was hit by an artillery shell. Visitors can walk through this crater and also experience what it is like to be in the trench, including the background sound.

Other exhibits will show you not only life on the battlefield, but also at home. You will see for example the light French tank Renault FT-17, which was historically the first tank with a full turret deployed in combat. This vehicle carries damage from the German hub. There are also exhibited military uniforms, weapons and personal items of soldiers. In total there are about 75,000 items, which means that the local collection is one of the largest in the world.

Once you are satisfied with military history, try The Nelson Atkins Museum of Art. Its scope is wide. It represents the art of North America, Europe, Asia or African cultures. There are works from ancient Greece, Rome or the Middle East. Some date back to the second millennium BC. The Africa section is a showcase of more than 2,500 years of local culture art. To fully appreciate what the museum has to offer, we recommend a guided tour.

Published: 13.9.2019
Today you will set out on a trip to the bowels of a steamer. Well, not quite, we go to the Arabia Steamboat Museum. On September 5, 1856, a steamer sank in the Missouri River, just 10 miles from Kansas City, carrying approximately 200 tons of supplies for stores in the American Midwest. The Arabia ship had been forgotten for over 130 years, until it was accidentally discovered by an amateur archaeologist in a cornfield, because the river had changed due to erosion.