The continent of Europe is extended in North Hemisphere in west part of Euro-Asia. Its surface 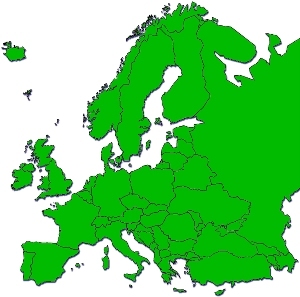 makes 10,5 millions of square kilometres. In Europe, there are living 720 millions of inhabitants , this is 12% of total world population. Europe is washed by North Ice Sea from the north, from west and south by Atlantic Ocean and belonging seas. From Asia, Europe is divided by Dardanelle and Bosphorus Straits as well as Kertsch Strait. Europe is very  variegated. One third of its surface is formed with peninsulas and islands. Regarding the biggest islands, there are, for instance the British Isles, New Country (Novaya Zemlya) and Spitzbergen. Smaller islands, such as Iceland and Cyprus, belong to Europe as well. North part of Europe is, thankful for their mountains, especially to continental glacier, extended in these areas in Fourth Formation Era. Average altitude of Europe makes 290 metres above sea level. So, most of a half of this continent are filled in plains. The lowest point of Europe is so called Caspian depression. This point is situated 28 metres below sea level. As far as the highest European peak is concerned, there is Mount Blanc peak, 4810 metres high. Nevertheless, there are discussed disputes at present that the highest European  mountain peak could be declared Elbrus which is 5648 metres high. However, there is a problem that this mountain has two peaks. As far as the active volcanos are concerned, there are to be found in Iceland and in South Europe.  Europe is forced to import most of raw materials, such as petrol, mainly from overseas. This continent is not too rich in such raw materials. In Europe, there are excavating, for instance, manganese, lead, zinc, tin, nickel, chromium, antimon,bauxite, mercury as well as potash salts. The European climate is mostly moderate.To the longest European rivers belong, first of all, Wolga, Danube, Ural, Dniepr and Don.