To no avail they say that there is a Slovakian sea in Croatia. This popular holiday destination conquered hearts of many Slovaks and the whole world. It is predominantly for its beautiful nature crystal clear sea and kidness of locals. Our journey to this small wonderful corner of the Earth began when we bought an excursion tour in the travel agency. We didn’t want to spent vacation days for this trip with my girlfriend, so we decided that we would go there only on a one-day trip . It was worth it! By no means this was a peaceful vacation. It was just the opposite. Our vacation was full of experiences and impressions we enjoyed for really affordable price 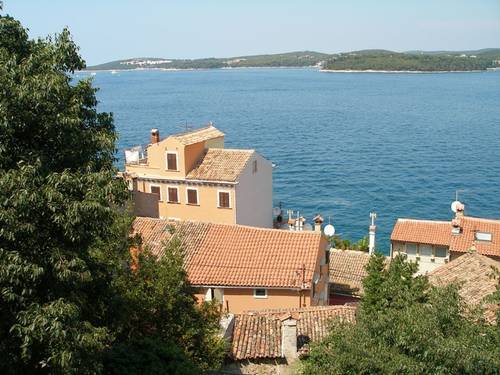 A trip to the long desired sea

Our adventure started at the bus station in Bratislava. There we got in our bus that set the destination of our vacation  - Croatia. We traveled in the night so panoramas we would otherwise see were hidden from our eyes. Well, like us most of co-passangers hadn’t slept. During every of mandatory stops people poured out of the bus to visit the toilet, or smoke a cigarette or have a cup of coffee. We rather walked about rest areas. Night life at this places went non-stop. And non-stop arrived buses with travellers as well as cars filled with crammed luggage. This made our feeling that our goal is nearing only stronger. After less comfortable waiting in a traffic jam between Austria and Slovenia, our journey passed more faster. Before sunrise we were greeted by first looks at long-desired Adriatic Sea . Signs by the road welcomed us in Croatia, a European Union country, and on the picturesque Istrian peninsula . 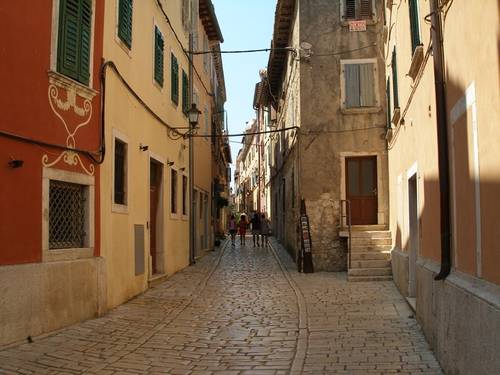 Extraordinary sights from the window of the bus

The road was lined with olive trees and vineyards. Red ground was glaring and behind some bushes popped up typical white Mediterranean houses of locals. After about an hour we found ourselves in woods of the so-called Lim bay . The look at this 9 kiometer long nature channel was breath-taking. Soon we approached our destination, we passed by historical towns like Porec and Vrsar known for recreation in nature, the womanizer Casanova, or marvelous landmarks such as a monastery, antic temples or the Euphrasian Basilica. The latter being among the UNESCO’s World Heritage sites. But our destination was the town of Rovinj. Reason behind this was perhaps its well-preserved medieval and renaissance features. After the arrival we went to gravel beach immediately. Since it was still just 8 in the morning vacationers enjoyed their breakfast and we enjoyed swimming in the warmes sea and sunbathing on still cold limestone rocks. We observed islands emerging from the sea, fishermen boats, and romantic atmosphere emanating from historical town of Rovinj. After two hours of relaxing the beach gradually crowded, the temperature was rising and we had decided to se out to the historical center. 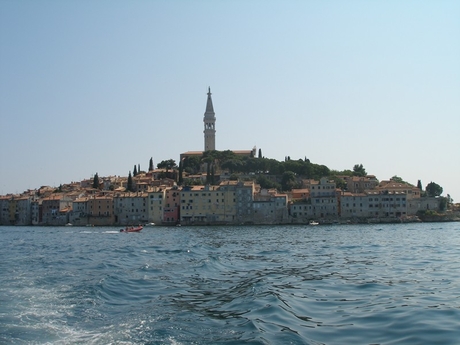 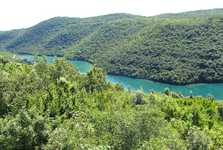 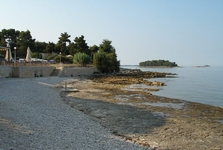 For a good price we sailed to the entrance “gate” of the city. The market. In omnipresent stalls one could buy sea shells, bracelets, fans and other things tourists love. Nearby there was a fruit market . Prices there were not so affordable to Slovaks. We leaved the market and ascended on the highest point of the town along narrow streets with shops and galleries, the St Euphemy church. The view from there gave us a whole new perspective. After we made several photos we stopped by on a lunch. Various variations of fish is local specialty and one simply can’t resist. We also didn’t resist and enjoyed seaside through our bellies. After a good meal we stopped for a cup of coffee and returned to the harbor with much impressions. We still had much time until the departure so we managed to collect several rocks that would remind us of this extraordinary trip. 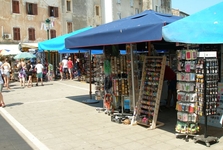 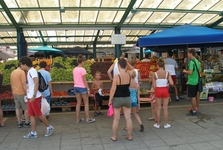 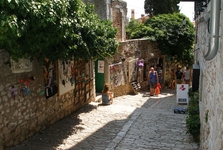 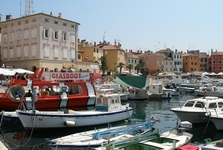 Istria, sea, beaches, historical places. This all left us with indescribable feelings that we also recommend you to experience. Give Croatia a try on a one-day trip at least. Wonderful nature there is combined with pleasant climate and the adventure of exploration.