Next day me, Jarka 2 and Maroš spent by a trip on bicycles. It was great! The rest of members of our expedition didn’t feel to do it. Even Jarka 2 wasn’t too happy about that, but eventually agreed. So, again came to the hotel minibus, we got back and went diagonally across the island to the lake Batur under the Batur volcano. Our driver was from a village under volcanoes. But even though in the village is better live, his job was tourism and lived in the city. He understands little bit Slovak. His basic dictionary we had added about the term "good pussy". He really liked it.

Knowing Indonesia from a bike

, where we each chose the one, we set it, and slowly went to the 40 km long trip to the town of Ubud. The bikes weren’t any technical marvel, but it did not occur to them and no problem. Unusual was only reversed position brake left hand hampered rear wheel, right front. Luckily we survived but, nobody flew over the front wheel. Even with a bike and helmet and we got a special wizard in uniform. He took us out of the village, in a surprisingly fields cultivated with coffee, hot peppers and tomatoes in the fields of sidewalks and trails.

No asphalt road but was not there, so we went back on the road. Initially, near the road we could still see undeveloped territory, no more later. We walked along the endless village punctuated by workshops in which the statues were made mainly in domestic temples. These workshops were one section in a row maybe thirty. In all there were people knocking into stone and chipped it. When they saw us, interrupting work, looked up, smiled, waved and shouted, "Hello, where are you from? What 'your name?" (Hey, where are you? What is your name?) - "We are from Slovakia, from Europe," (We are from Slovakia, Europe!) We replied, and they waved back. I felt a bit like when I was a little boy stood at the May Day parades, rode around the allegorical cars and we waved. But here it was the opposite, allegorical cars were at the edge of local and waved to us. While driving I filmed for the camera and I was so excited that I did not notice an oncoming scooter. Of course he went in the opposite direction, it means on the left. I managed to get it at the last minute to work around it but, what I was riding after, it was not the way anymore.

To see the low abode of Hindu families

Later guide led us on a tour of the house and one family on the road. It was the Hindu classic, fence with gate without doors, kitchen playhouse, playhouse children, house parents and gazebo to celebrate. And another fence with a gate without doors family altar. The kitchen had no windows or chimney, stove were two on the ground with him standing stones, inside were several pots of black smoke. Children's playhouse was equipped with two mattresses lying on the ground beside him and two cabinets.

But colour TV didn’t lack. To the parent´s house, we better didn’t go. Behind the houses was concreted tank full of water and near they kept piggy. I have to admit that a similar poverty in our country can be seen only in some Roma settlements, but they were clean and well-dressed, friendly and obviously happy. Daughter might have about thirteen years old, her face like a fashion magazine, I took a picture of her. Maroš had candies and he was immediately mate with children. At the end of the visit our guide gave to landlord some money as reward that we could look inside. 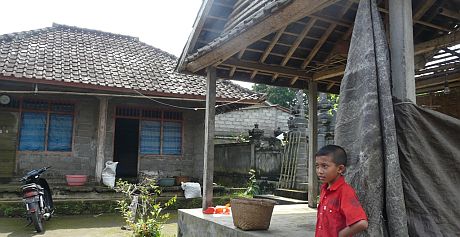 The whole trip was very pleasant, we breathed the air of the surrounding landscape, they felt her scent, smiling at people, and they to us. We passed rice fields, houses, temples, we saw the stadium banned cockfighting, we saw dry rice on the way, and how people cultivate rice paddies. There was a lot of people and especially children, everywhere reigned smiles, work and good mood. 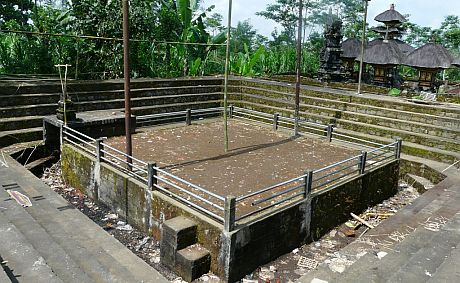 Arriving in Ubud and a great lunch

We completed the trip in Ubud, in the beautiful restaurant full of flowers and fresh breeze we had traditionally delicious lunch and we parted with a guide. We agreed with him that the next time for us to make a special trip - in the opposite direction - and we came back to the hotel.