We followed an asphalt road which went along the Bratislavske Airport fence. We were heading to Ivanka pri Dunaji village. At the middle of our journey, we found an interesting sight. It is an airport radar. A large, white sphere on red iron pedestal is fascinating. Right next to it is a beautiful lime tree alley. It an access road to Milan Rastislav Stefanik memorial. This sight is a memento to tragical plane accident from 4th of May 1919. Then, Slovakia lost one of its most important modern history figures. The compound was constructed in 1923. The project was created by famous architect Dusan Jurkovic. We have already seen his structures in Brezova pod Bradlom, Skalica or in Luhacovice, the Czech Republic. 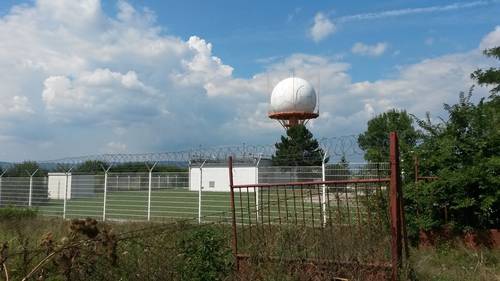 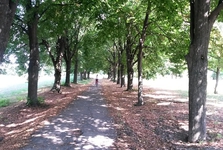 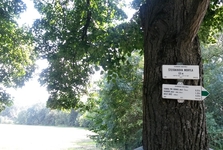 Upon riding through the alley we found ourselves in a compound lined with moats. In its center, there is pyramid a granite stele on which is an inscription about Stefanik. A stone half-circle bench is opposite to the memorial. Ten people can fit on it. Despite a pious nature of the place, the atmosphere is very pleasant. For a while we were in silence to honor the general. The compound is administered by the Ivanka pri Dunaji village. Every year the village holds ceremony to honor the general and cleans the place. We have to say it is really clean. There were also flowers and cut grass. 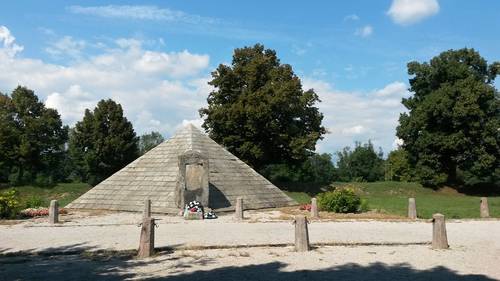 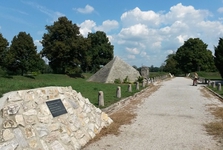 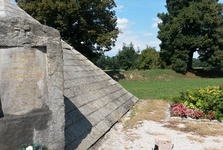 After a short break we went on. 10 minutes later, we arrived at Ivanka pri Dunaji. The history of the village dates back to 1209 and today 6000 people live there. It is a village that has one of the highest number of sunny days per year. We found out ourselves. When we were there the temperature rose to unpleasant 37 degrees Celsius. During our search for the path to Svaty Jur village we reached its center. It consists of newly renovated St Rozalie square with a chapel of the same name. The chapel is actually a rotund that has a neo-Classicist façade and a dome as a roof. Above stands a small belfry with a cross. The chapel was built in 1832 to commemorate the end of ablack plague. Even the name is related to the end of the epidemy as it happened on St Rozalie name’s day. Unfortunately, this was the single one sight we had visited due to time constrains. Still, we would like to return here one day to see a rococo chateau or St John the Baptist church. In the latter, documents which serve as legacy about the present times are held in a spehere that will be opened by future generations. Another place we would like to see is a “baroque park” or many sacral sights. 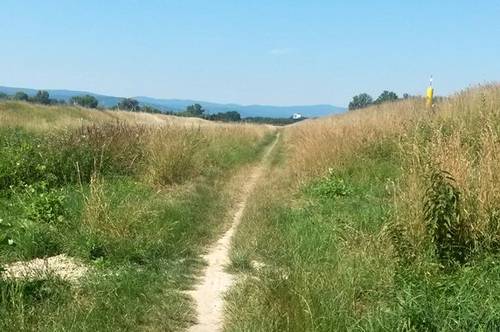 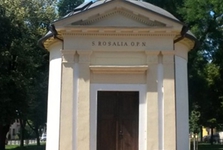 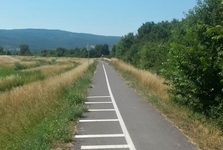 We wondered for a while but eventually we returned to the „Little Danube“ water cannal. We wanted to join Jurava, a new bike route. The field path along the water was some adventure. High grass, narrow pavement, crossing road bridges (Senecka Road, D1). Despite our worries if we had chosen the right way, we suddenly came to a crossroad. We could go either to Vajnory , a district of Bratislava, or to Sur Nature Reservation and continue to Svaty Jur village from there. The latter is the place where the Jurava bike trail starts. So we headed straight on, to Svaty Jur. How our biking day went from there on you will find out next week.