We managed a very pleasant bike trail along the ridge much faster than expected. We traveled to the upper cable car station ofLehotská, in Orava Snow ski resort. Despite mere hours ago I considered it unreal, we managed to get there essentially. Surprisingly, it was not so big drama to get up there as locals described. 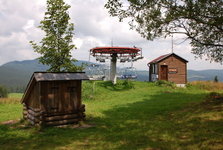 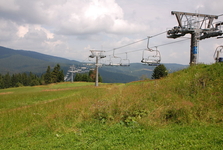 The cable way was not the only thing that lured us there. We were interested in the beautiful chapel. It is located near the Lehotska upper calbe way station, and possibly at the place of former church. According to the tradition, the church was transferred there from Polsko and it served the believers until 1739. It was, however, dismantled and sold to Babin village in 1925. Christians decided to built a chapel on the same place. The chapel was renovated ten years ago and has been serving ever since. By the chapel, there is the tomb of Joachim Zumer, the first pastor of the village. The entire surroundings of the chapel is very clean and very well maintained. The place is great for meditation. One even doesn’t have to be a believer to feel the positive energy of the place. 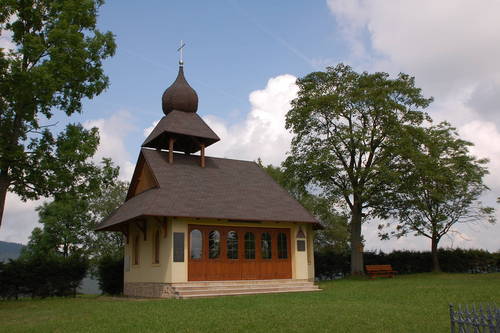 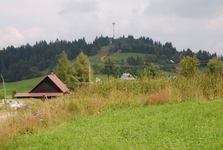 We made our last break there. Short debate after we decided to take some big hill. We saw a large antenna in the distance. Soon, our bikes were so hard to drive on wet terrain that my husband, otherwise a real bike master, dismounted and pushed his ride up. It was just below the top when the sky got cloudy and we depleted our water supplies. We decided to go back. We had seen Oravska Lesna below for a while. Our map was already packed in the backpack, so we returned a bit, asked locals who owned cottages there what is the fastest way down to the village. My husband agreed to wait somewhere for me during the downhill. It is a great challenge for me to go downhill in unknown terrain. So far I enjoy a tempo that provides me with enough adrenaline and is still safe for me. Still we could debate over this. As my husband says, sometimes it’s better just to fly and don’t think too much about it. One can only panic and fall down. We returned to Oravska Lesna safe and sound. And also dry (if I don’t count my sweaty clothes). The storm was, however, only about to come.

If you consider yourself a mountain biker you really have to visit Orava. There is a beautiful yet rough nature, countless bike trails thath would take you to wonderful places. You can see nature beauties there and many historic sight.

Published: 16.10.2014
I am really getting into mountain biking. There was a time I couldn’t even imagine that I would ride across mountain ridges. Even getting across it on foot was difficult. I thought I would give up right below the peak for many times. Today, I am realizing that I might be an enthusiastic mountain biker.