en.infoglobe.cz » CZ: Jeseníky Mountains - Kouty: Test The Newest Ski Resort, You Will Not Regret It!

CZ: Jeseníky Mountains - Kouty: Test The Newest Ski Resort, You Will Not Regret It!

Published: 16.12.2011
Historically, the second season starts this year, the baby of the ski resorts in the Czech Republic - Jeseníky Ski area Kouty. Operators on this year promise favourable prices. Compared to last year should also improve conditions for skiers and snowboarders.

Skiing permit in the main season costs 580 crowns per day. Ski Kouty over Desna lying in the northwestern slopes of Bear Mountain, has two red and one blue slope. Both red-marked trails measuring more than two kilometres, and will delight even the most demanding sport skiers. Bear in its central part turns into a pure Slalom hill. The second red, called Ridge, with its colour-coded as not to be overlooked. The indisputable advantage of both slopes is then their width - 50 meters, which is due to appear optically lower.

The beginners and less experienced skiers waiting in Kouty blue piste “U vrtulí”, which crosses both red lines. Here, because of the high altitude and orientation of the northwest slope, the snow had to endure long into the spring. There is even a snow park, where the number of jumps and obstacles excludes both beginners and advanced snowboarders and free skiers.

The complex operates, in the Czech Republic first, six seat express lift, which in less than seven minutes take up to 3200 persons per hour. In Kouty also operate two lifts and a children's line.

Also free parking capacity is sufficient according to the operators. Directly to the ski slopes lead bridge over the river Desna. Visitors can stop along the way in the woods Kouty whose educational park with lots of wooden figures shows a former life in Jeseník mainly excite the little ones.

New this season is the apres ski bar, which grew at the upper cable car station. Since December is in operation a new apartment building that fully meets the requirements of modern sports clientele, and where this year's New Year's Eve will be celebrated in a big way. Even now it is possible to book a good New Year's Eve packages. 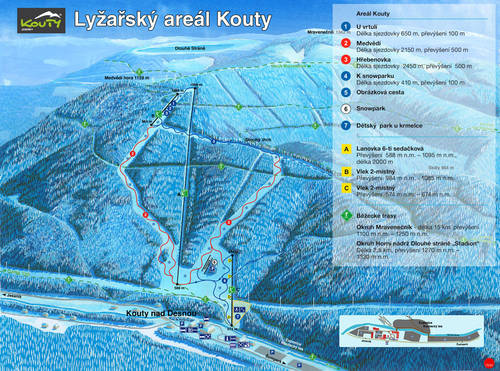 Ski areál Kouty - The Best Place For a Vacation