In North Moravia, not far from Polish border, in disconsolate countryside of re-cultivated heaps, at the edge of miners´ town of Karviná, there is situated - as a lost pearl - Neo-classical castle of Fryštát, with great nature-countryside park around.

of Fryštát town. At first, there was built wooden castle in Gothic style here, founded by Piastov Parentage of Těšín. Later, after the wooden building burnt down, there was constructed here Renaissance chateau. Within 15th and 16th centuries, the Dukes of Těšín stayed in Fryštát. They granted to a town many privileges. From notices of chronicles we know that, when in Fryštát stayed Ofka and Ann Těšínska, Duke

widows, the outstanding improvements were effected. However, in 1511, an extended big fire broke, and the whole chateau was destroyed. Anyway, new re-built Duke seat did not reached the original ostentatious look. Further owner, Duke Frederick Kasimir, was not satisfied with this place, so, he let to build in neighbouring place of Ráj (Paradise) nice Baroque chateau, where he transfered in 1570. However, after his death, the castle was confiscated and went to public sale. In 1572, the castle was bought by  Wenceslas Cikan of Slupsko,Country District Officer.

In a period, when the castle was in possession of this important Duke Parentage, the castle became an ownership of lower feudalist. He participated on common development of this dominion with introducing of various forms of enterpreneurs (fisheries and brewing-industry)

but the castle was not renovated. So, further fire followed in 1617, and 30-years war followed, with a consequence of total devastation of the whole region. Cikán of Slupsko Parentage were Protestants as religion, so they had to leave Fryštát in 1637. Aftertthat, various owners changed, and this fact did not helped to castle development. New owner, Zdenek Žampach of Potštejn, sold the chateau within two years. And during the possession of next owner, Henry Wenceslas of Minsterberg, the castle continued to fall to decay. In 1650, the castle was in possession of Gashin Parentage and became their main Parentage seat. Nevertheless, next change of owners followed since 1738. So, four new castle owners came within 11 years. In 1749, wretched chateau came in hands of Nicholas Taaf of Carlingford, Irish aristocrat. However, during hard reign of this 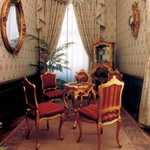 parentage, farmers´rebelion broke in 1766. As a result, new statutory labour patent for Silesia was issued. Anyway, during further fire in 1781, the castle was damaged in such way, that the owners transferred again to Ráj chateau. Finally, the castle was sold in auction again. In 1792, the castle came under administration of Larisch-Monnich Duke Parenatge: This aristocratic parentage held the castle till 1945. This parentage stayed in Karviná dominion since 16th century. Just at that time period, Larisch took important country as well as administrative places and their position at Emperor´s Offices was very good there. So, immediately after the purchase, there was started an extended reconstruction of the castle. When the reconstruction

works were terminated, the castle obtained Neo-classical face in 1800. In front of main castle-building, an extended decorating park was established, with stone fountain in its centre. From its south part,  there was created extended nature countryside park, in English style. At wall of parish church, there was erected family tomb, later, there were built castle wash-house with a bath, and at Mlýnky brook, summer house in Swiss style. The consequences of fire in 1823 were removed quickly and further park - arrangements continued.

So, in 1860 further improvements of castle continued, owing to adaptation to high-level position

of Duke John. He took a position (except his numerous titles and orders) of Austrian Finance Minister. He became a hereditary member of Upper House of Austrian Empire Council. Anyway, a construction of next luxurious seat in Solca quarter started to be effected. In 1873, the Duke Family transferred to this new castle of Solca. In the meantime, Fryštát castle was inhabited  by George Larisch, his nephew, with his wife Mary of Wallersee, niece of Empress Elizabeth. At the

beginning of 20th century, Fryštát castle hosted many important personalities. It was, first of all, Archduke Ferdinand d´Este, successor to Austrian throne, William II., German Emperor, and Ferdinand, Bulgarian Czar. Part of Larisch dominion and ownership, there were formed also by black-coals mines. They were founded practically since discovery of big sources of black coal in this area, just since end of 18th century. Last owner of castle, Duke John (he was born in Fryštát castle), transferred definitively to Solca castle. So, the castle was occassionaly used for visits. In 1945, the castle was confiscated and Czechoslovak Republic became its owner. Since that time, the

castle was used by General Direction of OKD mines, later there was a seat of Town Hall. Confiscated furniture from the castle was distributed to various collection funds of castles, museums and libraries, partially sold out, and probably also stolen. Within 1950-1960 period, there were effected here many incensible and tasteless building interferences. Since 1990, the castle is, including park, in possession of the town of Karviná. In a period 1994-1997, there was made a reconstruction of main castle building, and since 1997, the castle is open for public.

wings is opening into main square. In an axis of main wing, there is placed an entrance hall,and from here there are placed corridors, accessing adjacent rooms. Main and central space is formed with staircase hall behind entry vestibule. At main entrance, there are, along both parts, placed two early Baroque statues of Hercules. Building facades are arranged with cornices. The windows have mortar flat places with axis. The castle is - from one part - connected with covered corridor with St.Cross Church, and from the orther part - with

adjoining „Lottyhaus“ building, forming unique architectonical total. Back part of the castle is put on an edge of town´s elevation and joins to former castle park and garden of an acreage of 36 ha (now B. Němcová garden). In park, you find many rare wooden trees and also children corner on style of Slavonic piece of ground and relax area „Loděnice“ (Dockyard) where you can rent the boats for a drive along blind shoulder of Olše-river. In its central part, near to former stalls, you find Zoo-corner for deers and small water birds.

Closed on Mondays and on each first Sundays in a month.