Water reservoir of Hostivař  is to be found on the south-eastern  outskirts of Prague, on brook of Botič. It is the greatest natural bathing place in Prague.

The dam serves especially  as a protection against floodings , it is important as a holiday resort.

The dam is surrounded with forest-park from the norther and partially from the southern part.

On the southern part you find two beaches, The bigger frontal beach ( in the direction of Hostivař and Košík) is partially covered with a grass. You find here also , except standard equipment,  play-grounds for beach-volleyball tennis, etc. At the end of a beach  there is water-tobogan. The back, smaller beach ( with a main entrance of Jižní Město and Petrovice) is a nuda-beach (FKK-beach).

Hostivař- dam  is a centre of many cultural events within summer months (concerts). It is a popular place, attractive for fishermen. It is an except-trout hunting-ground marked as Botič 2. You can angle here, except  carps, roaches and several wild fish, also eels.

A little of history

In the area of today´s  Hostivař dam the brook Botič flew through similar countryside as it is now in the area of Natural monument of  Botič bends (Meandry Botiče- part of a brook close to the dam-pier). At the middle of a flow there was Moucha Mill.

There were several  bathing places in this area in the past. The first written notice is of 1924, when the football players of SK Hostivař boarded so called thge fifth pool. However, this simple place was destroyed by small flooding in the next year. The bathing place made in 1950, constructed by  members of Sokol Hostivař,  withstanded  at the latest. Except of the main 50 m bassin, there were two smaller bassins, including the further equipment.

Everything worked till the dam-building, now it is all let on the bottom.

After a big flooding of 8th July 1958 it came a decision to construct a dam. Its building was effected  within 1961-1963, its filling with water was made in 1964. On a neighbouring slope there were planted  240 ha of forest and its upper part arranged as a park. The walking paths were made in the surroundings.

The dam became soon ,after its filling, the popular holiday resort of  Prague citizens.

The 70s´ were  most famous period  of dam existence.  A regular bus connection of line No.226 (Máměstí Míru-Dam Hostivař) was in charge within summer holiday months.

Now, the dam is managed by the organisation of Lesy (Forests) of Capital Prague. 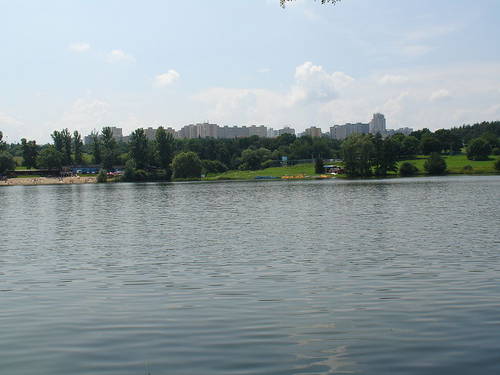