This rope railway is situated in Moravian Karst Preserved Countryside Area, or in places of two main Karst dominanta, i.e. Macocha Abyss and Punkva Caves. Increased number of visitors is coming here, and Skalní mlýn Hotel (Rock Mill Hotel) is looking after them. Between Skalní mlýn and entrance into Punkva Caves, there was passed four kilometres long narrow road, passable for cars in difficult way, and also parking possibilities were limited here. So, Moravian Karst Society, thanks to increasing tourist movement, made complete reconstruction of the hotel and presented his suggestion, to close car traffic for this section, and transport of visitors was effected by means of suspension rope-railway from parking place, situated at upper part of Macocha abyss.

In 1992, there was signed an agreement with the company Doppelmayr, regarding construction of rope railway. Afterthat, a cabin rope railway, with swinging traffic and two cabins with capacity of 15 persons, was chosen. Despite the fact that there was an intention to protect local nature from cars, so there was started a wave of resistation against this construction. The builting continued ahead slowly but several times it seemed to be that the building would be stopped. Nevertheless, there was succeeded, this cabin rope railway was put into operation in May 1995. From the first view, there is obvious that construction of this rope railway helped a lot to this area. An automobile traffic in Punkva Valley was managed to be closed, and the visitors were rectified in a sense that no trace is to be noticed in nature damage, The rope railway stations are nearly invisible. 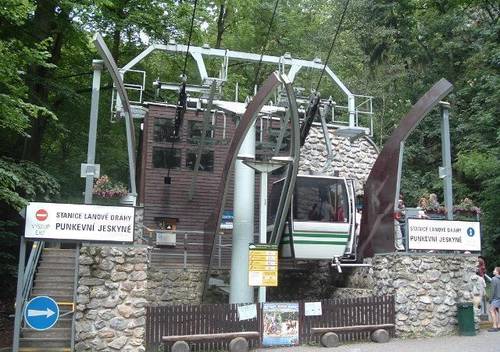