Diana rope-railway is situated in Karlovy Vary (Carlsbad). It was constructed within 1911-1912, according to plans of Engineer H.H.Peter. The line was set in operation  in August 1912, just

after several weeks when the second rope railway  in direction to Imperial Hotel was open for public. At that time, this rope railway was the longest in Austria-Hungary Empire.

Originally, this line was 437 metres long. At present, its length makes 453 metres and high-exceed makes 167 metres. Drive time-period makes 7 minutes. It is one rail track equipped with Abt points. The line has three stations, low is situated near to Pupp Grandhotel, another station is Jelení skok (Deer´s Jump) and next one is Diana. From here, you walk to Diana look out tower. The platform is accessible from both parts as the carriages have the door along both sides.

This rope railway was the first non-private rope railway in Carlsbad. It was constructed by Leo Arnoldi, Viennese company. Since 1956, Transport Company Karlovy Vary is in charge of this line. Since 1960, the rope railway was operating all year round. Later, in a period since 16th September 1963 till 6th June 1965, the railway undergone complex reconstruction, and new carriages from Tatra Smíchov, Prague, were delivered here. Within 1972-1974, all electric equipments were reconstructed. However, the operation of rope railway as well as of look out tower, was finished in 1980. In time period 1984-1988, a radical railway modernization was effected, and next change of carriages made, upper station was completely reconstructed. Later, on 20th December 1988, the traffic was re-open again. The look out tower was re-open early in 1991. 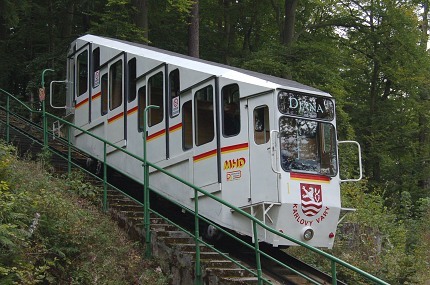