This rope railway was set in operation just on 1st July 1961. The construction took two years and  was participated by companies, such as Transporta Chrudim, Electroworks Prague and Water Constructions Tábor. This equipment was used, for the first time, by means of supports made from pipe construction, pulley battery, including finding a position and pulleys with rubber base.

Rope railway length makes 1792 metres, the exceed makes 383 metres. Rope railway has 100 firmly fixed seats. Its transport capacity is 220 persons within an hour. This rope railway transported, within time period of its existence, more than 3 millions of passengers. The route of rope railway is formed with transport rope, which is led by means of pulleys in pulley-batteries, on 22 traffic supports of „T“ formation. In the course of 1980-1985, extensive recostruction works were effected, including new electro-installation, seats and change of all pulley batteries, including pulleys. An extensive maintenance is being made once during six months (in spring and in autumn), when the rope railway is closed for public traffic. 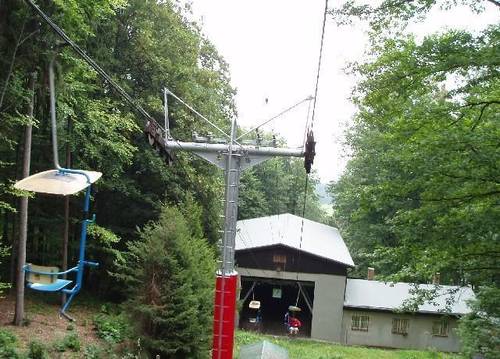