This rope railway was created in Mariánské Lázně, in an area, where the construction of such type was never installed. When the rope railway was built, it was not final target to construct it but its intention was to increase town´s prestige. This project was worked out since 1980, worked over several times in the course of years, as finally, there was decided to construct so called „pulse rope railway“. On the route, there were to be installed two groups with five gondolas, each of them destined for five passangers. The plan calculated with a possibility that the entrance would be effected during drive, at slowed speed. Nevertheless, after several changes, there was defined a route, leading from Koliba Restaurant up to elevation behind the town. However, this project proved that the visits of rope railway would be low, as the line is quite distant from city centre. So, original plan calculated even with construction of trolley-bus route, up to Koliba Restaurant. Nevertheless, this project was not realized.

So, the construction started to be done in 1988, and nobody knew who exactly would became rope railway operator. Tatrapoma-company was a supplier. However, serious problems occured with bad construction, so offical opening for public was postponed several times. In winter saison 1993-1994, rope railway operated in testing regime, and no troubles occured, however, no profits were presented. In summer 1994, Public Transport Company Mariánské Lázně took over the operation. However, the traffic was open in autumn 1994, but soon it was out of order again. This situation lasted till 1998, when all propriety inacurracies among Public Transport Company and the Town´s Administrative Office managed to be solved. So, rope-railway line started, after five years, its regular traffic time table. The rope railway is operating since Fridays till Sundays for the time being. 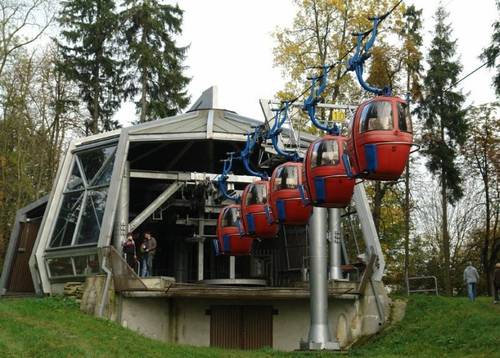