Karlova Studánka is a spa-community situated in Bruntál district. It has 226 inhabitants and its extent is 46 ha. With its altitude of 800 metres above sea level, it is highest placed community of Bruntál district. Not far from here, there is situated Praděd, the highest peak of Jeseníky Mountains.

The spa was established by Maxmilian Frank, son of Empress Mary Therese. First spa houses were those of Hostinský dům (Host House) and Knížecí dům (Knight House). Later, there were constructed another houses, such as Silesia House or Libuše.

There are to be found here eight sources altogether. Some bear the names after known personalities, siuch as Maxmilian Spring. He ordered to check the environs, and so he found these healing water springs. All local springs have high share of oxide carbonic, thanks to peat-bogs, which prevented air-circulation. These springs could be obtained, for instance in Drinking Pavillon (William spring) or in Libuše House. 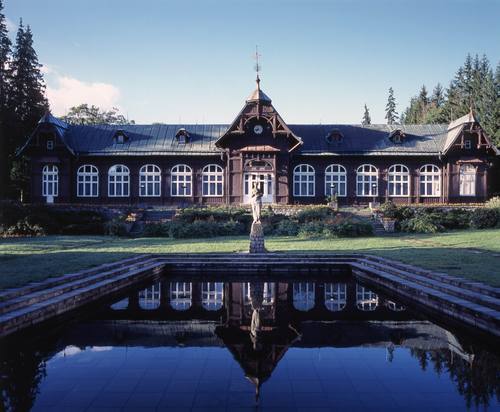