Watertower Hladnov In Slezská Ostrava was built within 1908-1909, according to projects of Jaroslav Volenec. The building was constructed by local company E. Vojtek and K. Rossmann. Watertower is connected with firemen arsenal and other prismatic tower with staircases and look out tower.

Supporting walls of staircase were boarded with ceramic reliefs fountain. It is Ostrava-varianta of fountain on the corner of union wing of National House in Prostějov. This artefact proved to be as most important artistic detail of this Ostrava construction.

Reconstruction of the building

From outside, the arrangement was presented by change of window holes, facades and covering of restaurant floor with wooden boards. However, from technical equipment, there was preserved absolutely nothing.

In 1992, on base of older plan, the tower was declared as cultural monument. At present, the construction lost its function as view point as, just in their neighbourhood, there is being built seven-storey flat complex. So, water tower disappeared definitively from panorama of Slezska Ostrava. 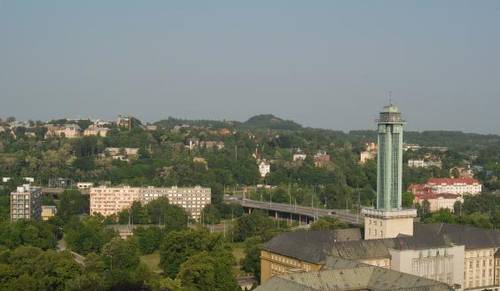