Wallenstein Garden is situated in Malá Strana quarter in Prague, and it is one of most impressive Baroque buildings in Czech Republic. The garden forms a part of Wallenstein Palace, established as a seat of Senate of Czech Republic at present. This seat involves also Wallenstein Riding-Ground, neighbouring Kolowrat Palace and Small Furstenberg Palace.

The garden was constructed, together with a palace. Originally, it was created in Italian style. Nevertheless, the change into more nature formation was effected in the course of 18th century. So, an artificial rock was created here. After reconstructions, made within 1950-1990, the look was changed more to original conception. On east section, Salla terrena is to be found, and on opposite side, statue of Hercules.

Rich green is added with three fountains  and statues. Most of original statues formed a part of Wallenstein collection, however, the Swedish troops took it away (as war plunder) within 30 years´ war. On south part, there is to be found an aviary for exotic birds. Inside the garden, there are to be seen free walking peacocks and wild ducks, in an aviary, two couples of  eagle-owls are living, and in small pond, variegated number of fish are to be found. The visitors will be enthusiastic, first of all, with Salla terrena. It is three-axis, colossal building, reminding with its largeness to main hall, and it does not have any other similar copy. The decoration is in harmony with the decoration with other remaining palace spaces.

The ceiling is decorated with frescos, divided into three sections of Greek Olympus: Zeus and Hera with Venus in the middle, in south section Gods of Troya, whereas in north section you find Helen Gods. Medaillon around Olympus presents the heroes of Troya War, and its subject could be found also ins three lunettes in frontal wall. 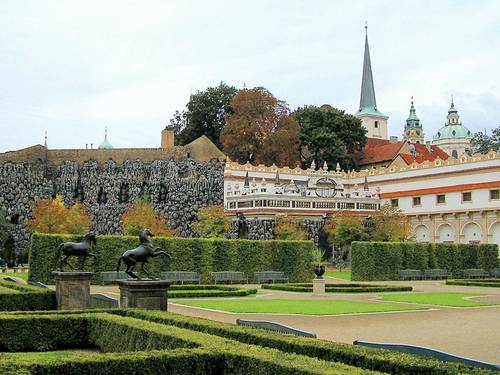