In 1864, when miners in the town of Jáchymov mined the iron ore in depth of 500 metres

approx., strong spring of water spouted suddenly, and the whole gallery was inundated soon. Anyway, as far as the balneology is concerned, this activity started in 1906, and by means of small private baths only. In 1911, new balneology building was open for public, at state contribution. Very favourable, good treatment results led to the fact that Hotel Radium Kurhaus (today´s Radium Palace) was open in 1912. At that time, the hotel belonged to best in Europe. Later, another buildings, including hotels, were constructed. In 1930, nearly nine thousand of spa guests visited Jáchymov in a year.

Within 2nd World War, mining of uranium ore was enlarged here, which influenced in negative way the fame of spa. Nevertheless, the change was effected since 1960, when uranium excavation was terminated. The town as well as the spa have the boom and are open for public and a world.

Healing Jáchymov Spa, Ltd. was established in 1990. The company invested into reconstruction of balneology shaft „Svornost“ („Concord“), including its springs, many million of crowns, further, Radium Palace is being modernized, etc. Let´s hope that this work and efforts retiurn to spa as well as the town its world´s fame. 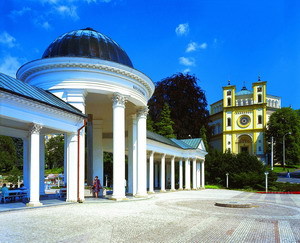