Botanical garden in Liberec is the oldest botanical garden in Czech Republic at all. Whole area is established in crystalic form and it consists of nine pavillons, its total surface makes 3000 square meters together. You can find 13 various botanical themes in these spaces. This garden is visited by 187000-233000 persons each year. In outdoor space, there are located next 9 glasshouses as a necessary hinterland.

Botanical garden in Liberec was founded in 1876 by Nature Friends Club. This club bought real estates (on Masaryk chausee today) for bush and trees planting and for plants-sowing in town´s parks. In 1884, there was built here a glasshouse. However, in 1893, there was necessary to clear this ground, owing to construction of new museum building, so the garden had to be moved (transferred) to former military hospital, where there is to be found now. So, new garden was open for public on 5th September 1895. Nevertheless, it did not served as educational institute at that time, but as supply centre of green for the town. Within period of 1st World War, the garden had mostly greengrocery character. In 1925, there was bought first great glasshouse, serving for exhibition of tropical plants. In the course of 2nd World War, the garden served for the population as an inspiration of better gardening. Later, there were to be found here two beds of healing plants only, several trees, old palm glasshouse, several unheated cultivating small greenhouses and small basin for water plants.

In 1954, the town administration decided for complete change of present gardening place for culture and educational institute. So, North Bohemia Botanical Garden was founded let by Pavel Smrz. The garden changed, at that time, plant-seeds with botanical gardens nor only from Europe, but also from overseas. Till 1960, there were constructed two next glasshouses and fresh-water aquarium, the greatest one in Czechoslovakia at that time. Local collection of cactuses as well as orchids became quite famous. In 1990, Dr. Miroslav Studnicka was nominated as a director of the garden. At that time, there was necessary to modernize all actual glasshouses. So, within 1995-2005, old buildings were demolished and there was constructed here, on this place, the actual complex of 9 exhibition pavillons and 9 cultivating glasshouses. Since 1995, the garden uses the name Botanická zahrada Liberec (Botanical Garden Liberec). In 2003, there was established here (according to the order of Ministry for Life Environments) so called rescue centre CITES, serving for protection of most threatened sorts of plants of the world, before its total exterminating. 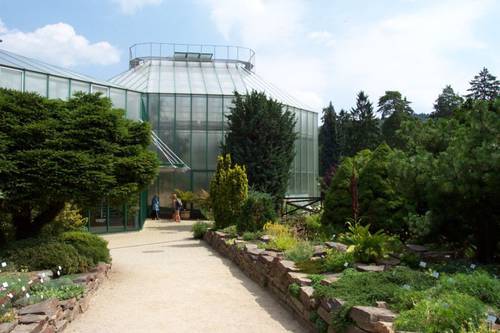