ZOO Garden in Liberec is the oldest one in Czech Republic. More than 170 sorts of animals are kept here on surface of 13 ha. 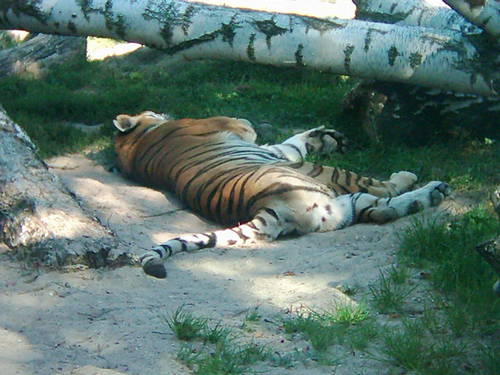 On 2nd July 1895, local ornitological club founded here „Birds´ Corner“, later the aviary in town´s park, open for public since 1904, was constructed. Next enlargement came with presentation of swans on small lake nearby, and foundation of roe-deers´ paddock on a meadow. So, wooden cottage in Tirol style, known as stork-nest, became a centre of this ZOO garden. The construction was brought here by Alfred Hubner in 1907. Around this „stork-nest“, there was subsequently enlarged an area, as there was born an idea for change into small ZOO garden. However, this effort was cancelled within 1st World War, owing to lack of financial means.

When the war was over, and Czechoslovakia was established, Liberec Municipialty did their best to maintain the town´s fame. So, ZOO foundation proved to be as a priority. From this reason, Tiergarten Club was founded, and ZOO garden was open for public in 1919. As the first manager, Erich Sluwa was nominated, and he was a director till 1945. However, during this time period, ZOO garden was quite unknown, and when ZOO Garden in Prague was open (in 1931) this institution in Liberec remained in isolation. Within 1939-1945, approx. 500 animals from total quantity of 134 sorts were kept here. At that time,the garden had a character of menagerie, i.e. many animals, placed on small surface, so, nothing special, as the garden was organized in unpractical way and the animals could be seen in summer only.

Nevertheless, after the war, the whole area was in desolate state, and there were also the voices that the ZOO could be closed. Anyway, since 1954, during management of George Badalec, the garden started to be specialized for menaced animal sorts. In 1957, birds´pavillon  was constructed, and space for bears was built. Later, in 1960, a stable for zebras and cottage for aurochs was finished. Although the cooperation with another West gardens was impossible, and moreover, Liberec lost its status of Regional town, the development of ZOO garden continued ahead. So, since 1962, there is to be found here baboons´ pavillon, since 1966, the pavillon for chimpanzees was terminated, since 1975 pavillon for elephants is available.

During management of another director, Mr. Joseph Janeček, new object for penguins was built in 1982, and two years later, new home for birds of prey was constructed in 1984.

New home for giraffes and rhinoceros was finished in 1987, and in the same year was started breeding of snow leopards.

Dr. David Nejedlo is an actual director of Liberec ZOO Garden. ZOO keeps 170 sorts of animals for the time being, in total quantity of nearly 1000 animals. In 2005, Liberec ZOO Garden was visited by 339 435 persons.