A ruin of Bezděz Castle is situated in very nice countryside, in southeastern direction of Mácha Lake. Bezděz belongs to most known and popular castles of Czech Republic.

that in Bezděz-forests there was founded a town. However, nobody mentioned which type and where. Originally, the castle served as a fortress and a representative King´s place. Anyway, its conception was changed several times. The construction of castle was effected since 1264 till 1278. At that time, local handicraftsmen managed to build a fortress, very interesing from architectonical point of view, and nearly impregnable, in accordance with original plans.

In 1278, King Přemysl Ottokar II died in a battle on Moravian Field. The castle became an unvoluntary prison (jail) for his son, Prince Royal Wenceslas and his wife Kunhuta. Anyway, Queen  managed to escape quite soon, nevertheless, her son, future sovereign, had to wait - for his redemption - presenting to 15000 talents of silver and several castles, till 1283. Wenceslas II. raised to the throne, and ceased Bezděz Castle (after bad reminders) to Hynek Berka of Dubá. He and his son lived in castle till 1348.

Emperor Charles IV. decided, in order strentgthen his central power, that Bezděz, nor other important castles, cannot be ceased in the future. He himself often stayed here, and instructed

that a pond was found nearby (today´s Mácha Lake). However, Charles´ regulation was not respected any more and Bezděz Castle was successively ceased later several times. The last one, who kept the castle in mortgage, was Emperor Rudolph II. He cancelled this mortgage in 1588. The castle was sold for 22000 heaps of pennies to Jan of Vartenberg. Later, the castle obtained Václav Berka of Dubá and Lipá, by means of wedding with a widow of deceased husband Jan. However, he lost it after his flight from lost White Hill battle. At his absence, all his property was confiscated, and he was sentenced to death. At this time period, the castle remained deserted, conquested and destroyed with fire.

In 1622, Bezděz  became an ownership of Albrecht of Wallenstein. He decided  that

the castle would be changed to modern fortress. Finally, he let to build here a monastery.

In 1642, (at that time lived here one hermit only) Bezděz was conquested by Swedish troops. They plundered and destroyed with fire the castle again.

Bezděz Castle was taken as a sign of Bohemian statesmanship, therefore it was declared as a National Cultural Monument. At present, the ruin offers to visitors six expositions (palace, two towers - Big and Black - King´s and  Burgrave´s Palace, and chapel, which belongs to most valuable constructions of early Gothic period.

In environs of Bezděz Castle, operated (according to legends) devils. Anyway, you cannot be afraid of, so called Devil´s Hill, Devil´s Wall and Devil´s Tower remained only. So, if you do not mind a little difficult climbings and  your conscience is clear, you do not have any obstacles in reaching the castle. 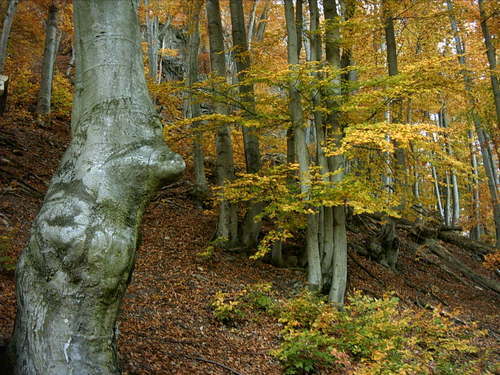