In 1870, local town theatre of Reduta, situated on Zelný trh (Vegetables Market) burnt down completely. So, it was necessary to build new theathre. In 1882, there was terminated the construction of new German Town´s Theatre „Na Hradbách“, today known as Mahen Theatre. The project was made according to plans of famous Viennese company of F. Felmer and H.Helmer (this company constructed many other European theatres). The theatre was constructed by J.Arnold, together with architect J.Nebehostensky. The theatre was open for public within 17 months since starting. However, there was necessary to change the dispositions, in order not to be finished with similar destiny (fire) as in case of theatre in Nizza (France) in spring, or National Theatre in Prague (in August) or very damaged Circular Theatre in Vienna. So, new entrances and exits were suggested and two lateral staircases made. It was decided at the same time that electric illuminations would substitute original gas illumination.

So, Brno, as the greatest Austrian-Hungary town, with 82600 inhabitants, let to built, as completely new theatre in Europe, the building with electric illumination. You have to take into consideration, that electric stream was not applicated everywhere, so small electric power station, for use of theatre only, was constructed. Twenty five years late, T. A. Edison, author of this project, visited Brno.

Mahen Theatre is built in a style, combination of Neo-classicism, Neo-renaissance and Neo-Baroque. Originally, theatre capacity was reserved for 1195 visitors, however, later, the capacity was diminuished to 572 places, it is valid till now. As the first dramaturgist, was nominated George Mahen, local writer, an his name bears the theatre now. 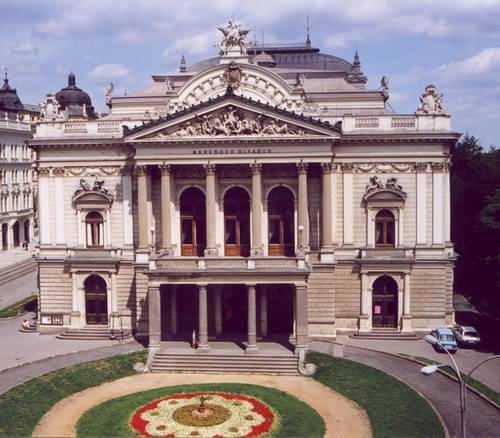