ZOO garden is situated in picturesque valley of Jihlávka-river. In the area, there are to be found

meadows, afforested slopes, water basins and rocks, in neighbourhood of the town. Local ZOO is a home for more than 100 sorts of exotic animals, including rare and menaced sorts. The ZOO is specialized for husbandry of cat - beasts of pray, reptiles and monkeys. In 1983, the ZOO garden got a title „ZOO Garden of 1982“.

ZOO Garden in Jihlava was originally founded as ZOO-corner in afforested valley of Jihlávka-river. Project was presented in

1957 by Oldřich Vávra, inspector for culture and founder of Vavra-group, together with Henry Weiss (he worked as chef of scene-shifters in Jihlava). So, the base was formed, first of all, with pheasants and parrots. Later, other aninmals were obtained, such as brown bears, dingo-dogs, jackals, roe-deers, and Carpathian bears. Anyway, after certain time period, the capacity overcame zoo-corner status. So, there were founded stables, aviary for birds of prey and other equipments, some of them are serving even now.

Nevertheless, most important year for ZOO was those of 1967. In autumn, there was nominated as a director former administrator of reptiles - Mr. Vladislav Jiroušek. Within his 40 years lasting administration, top ZOO garden was established, instead of „postpoing place of uncomfortable animals from other gardens“.

In 2003, there was established here unique African village Matongo, which gives a ZOO exotic and modern character at the same time. In similar style, as there are cottages, built from clay and  reeds, there are made other objects in back part of the ZOO. Former omnipresent concrete was everywhere substituted with wood and other nature materials. This Zoo uses the marking - „ZOO without gitters“.

Today, ZOO is a contributing organization managed by Jihlava Municipiality, presenting money sources. So, the husbandry is extended by means of own reproducing only, or through change with other ZOO gardens or by gifts. Main target is: husbandry of menaced sorts and keeping of genetical information of animals. ZOO wishes to be, as very important target, a garden without gitters. In 2006, total dimension of the garden was increased, when new entrance at east parking place was built, where surikats´exposition is to be found. 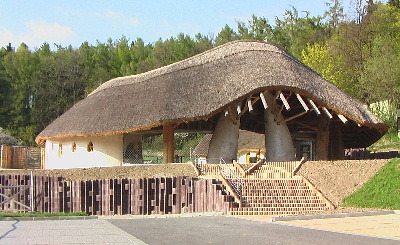