As you already know from previous text messages from the web, so I grabbed my back and advance to the C II was slower than the first time. This is the story, how Radek almost had to call the helicopter. Right that night through sister and SMS his mother called him names, he that didn’t care about me and did drama. 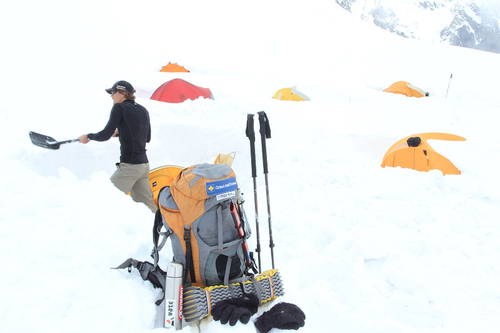 But I have to refute it. He taught me everything good "son of mountain" would know. He takes me to the cafes, pubs, (but it took even climbers in Kathmandu), teach me breathe, pee, fast walk, cook ...

Well I must admit that I do not know anyone (and I'm no first time climber), who is trained well and still he almost does not matter the height. There have many such. Then I met at least. Maybe Mara H.? First I had depress, that I can´t catch him, but ... ho ho ho ... I am better in embroideries ... 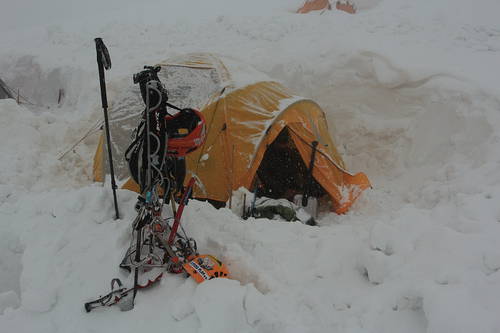 In the morning and evening I ate the pill for back pain and was able to climb up. Sometime around noon, we again find ourselves in places where human (Sherpa) leg still didn´t step this year (so for 7 to 10 days with pen). We were cracking under the pull-off the wall like a cow. And below it challenged a lot of rocks and still growing. Radek had me there for a while waiting and found a way yet to get into the wall. Although it was a little daring, but it went ok. We selected the firn wall approaches, we whom it should go. The rest of the wall ugly flashes - ice blue water ...

Again, after the line a bit lagging behind me now to change I lost the strap from the ax and I have to climb down little bit to get it.

When I got to the wall and traverse to the firn (transition stage between snow and ice), I can see that Radek is coming back to me. What is happening?  The "firn groove" is not firn. It's ugly layer of snow on the ice. But what is worse ... that are flying across the wall rocks. Quickly agree that this probably not and carefully reversed (we monitor each other flying little stones). Starting and blow a lot and so we decide to descend to C II, where the overnight stay for the third time. The next day we choose a fast descent and subsequent move to the lowlands. Then to Annapurna. This year is of little snow and Everest is the assumption that it would be for the foreseeable future conditions improve. The new snow is expected, markers will be a long time, so ... 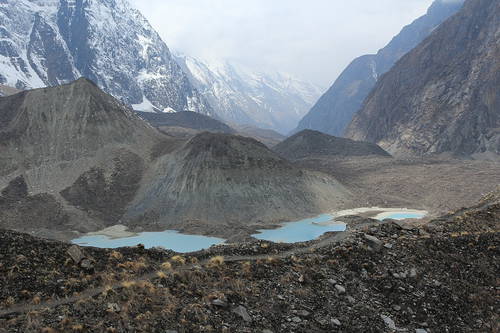 Although acclimation did not go according to our dream scenario (sleep at 7300 m), but it simply didn’t work and we hope, that it will be enough to get to Annapurna. Neither of us would not have a problem with higher altitude ... (experience from the past ...)

Good news for my mother, sister, Mirča, and friends sounds: Radek is not crazy

When I asked him tonight whether to go for it if it were itself (wall outlet to C III), said no - so OK :)

For the second time cross the Khumbu glacier. Early on you, dear readers, I apologize for my total fed up. Now it is already in Pokhara fizzled a bit, but ...

I quite managed to descend quickly. I have already got used to crack the charts through, the threat of falling Šerák and enjoyed how I'll be down soon and that I was not there and I do not grab the sun doesn’t burn us. 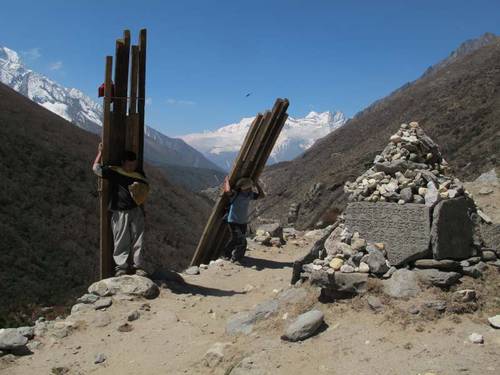 Oh yeah. Then I came almost perpendicular to the catch-up (for me descent), where fixech hung below me a lot of people. Well, wait. But oh. It's something they can´t. Unfortunately it was not nowhere to pass it. Well Radek said that I was too nice and I get in there. After about 45 minutes, a group of 40 Chileans "ran". So we are also waiting with sash rejoiced. But before we could recover, there was another group and I nearly jumped out of the skin. It was the Indian army, which at that point even filmed. Perhaps for that in their midst was about 6 girls. But the rate of walk. Ufff. Always before I let someone into the Icefall, he would have to travel in BC Cyclo least 30 km. Perhaps the number of people reduce in half :)

Go down on solid ground:

That day we want to Pheriche

This would Radek every quarter of an hour was allowed to meet someone famous and the start to talk. Then we prosecute. Although he says I'm slow, but what am I supposed to do when I have short legs.

It started with a Canadian girl - not very nice looking, but friendly - she wants to shoot with Radek

And then, Jesus, I almost passed Gerlinde (3th girl in the world with all eight thousand mountain - probably the first honest) - such a beautiful girl - luckily the report :-) Radek - Radek wants to take pictures! :-) 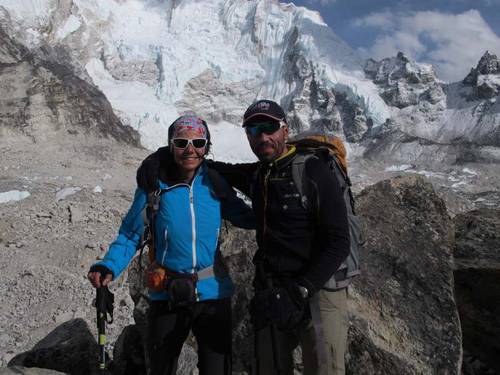 I come around 18 h to Lobuche, where he at me impatiently waiting Radek. With darkness we continue to Dughly approximately 4400 m.

And the next day already we are in rush from morning to Namche Bazaar and then to Lukla.