en.infoglobe.cz » Climbing As An Novelty In Our Life - VIDEO

In the video is the best Czech women climber Lucie Hrozová, the only woman in the world, who consulted with an overhang in the Austrian Alps.

"To our school is coming even little boy, who is only two and a half years old," says Kamil Korejs, instructor of climbing walls Mammut. "For him it is the first steps in this sport, of course through the game."

In the very beginning one you should think about what is your expectation in climbing and after modified your trying. For the ideal begin is a good start in pair with someone. First, because you have little responsibility for your partner and at the other and if you've decided together, you should take your new hobby seriously. And especially therefore for climbing, bouldering besides, are I always need two persons - one who climbs the other, it is certain.

An experienced instructor is the guarantee that the very first attempts hardly won´t land to the ground. His advice then also significantly reduce the time you would probably lost by exploration of all sorts, from choosing the right size shoes for climbing - climbing shoes, over the mysteries about donning into the seat, and by his experience, you get served right in the moment, when you need them most. By participating in a climbing course you also get new friends - an inherent source of entertainment that simply belongs to the sport. 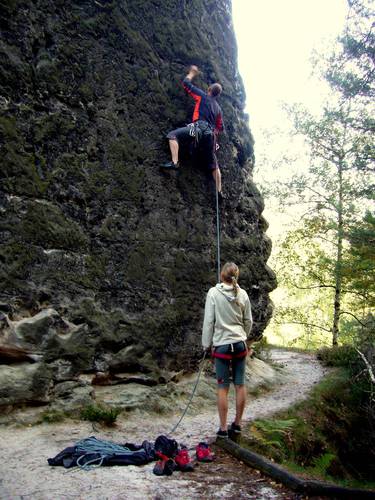 There is no better place to concentrate all the knowledge about climbing than climbing wall. In the winter is also the most accessible. There is no easier way to start climbing, than that a man pays his instructor. "If you really want to start climbing and you do not have anyone you can help with that, definitely worth a go at some resort. Reduces the level of risk, which there always is when someone comes to the climbing wall and thinks it is easy learn by watching, "says Kamil Korejs, instructor from Mammut centre.

The errors can gives the lesson, but the wretched is learning from mistakes such as those of climbing falls to the ground. This of course prevents many minor bugs, but which in its final impact may end up being on the ground. Only after such a rough experience usually comes a kind of awareness and humility, too." There are things, different skills or techniques which can look simple, and seems, you don´t need to care how you do it. But it does matter, there is always a particular way, and if it's done poorly, it can be a problem and then also to be an accident, "warns Korejs.

Published: 22.10.2011
Fear- is part human and animal life and the also defence mechanism of the organism. But sometimes it can be more insidious than we like ourselves. This is the right moment to start to fight with the fear, or exactly fight with us. The first type of fear that comes to mind in relation to climbing is the fear of heights.

Climbing Instructor As An Personality

Published: 15.10.2011
"For the climbing instructor is important, how he can attract people, motivate and how he is able to transmit knowledge them,"says Kamil Korejs from Holešovice Horoškola Mammut.