en.infoglobe.cz » Climbing Instructor As An Personality

Climbing Instructor As An Personality

Published: 15.10.2011
"For the climbing instructor is important, how he can attract people, motivate and how he is able to transmit knowledge them,"says Kamil Korejs from Holešovice Horoškola Mammut.

"For the climbing instructor is important, how he can attract people, motivate and how he is able to transmit knowledge them," says Kamil Korejs from Holesovice Horoškoly Mammut.

Necessarily does not mean that if a person is a good climber, will also be a good instructor. Theis teacher can be without some didactic skills and knowledge. Especially with children, which naturally require more attention, he can´t work well and it is hard may be difficult to keep their attention on moments which are important in climbing.

Perfect backbond as a basic

Number one priority remains flawless backbond. Before that is inevitable that the beginner to the well-dressed to the seat squab, but this is chapter itself. Checking beginners by someone professinal is therefore absolutely necessary. 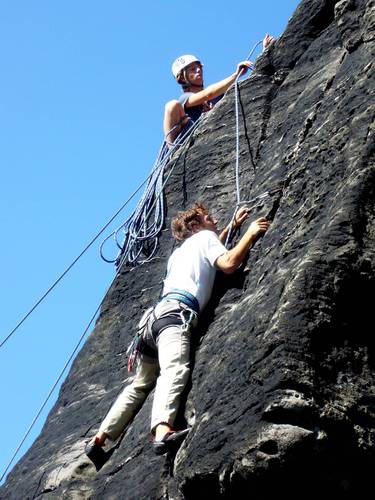 "Proper backbond is the very beginning in climbing. Vices that people unfortunately are easy to learn in the beginning, they are break down very badly later, "said Kamil Korejs. Meanwhile, a group of about ten wards wears the seat squab. He stops one by one to check them out. Several children made ​​a mistake and wore the seat squab incorrectly. They did it in a hurry to be on the wall quicker. Right these "hasty" failings use to be fatal one.

The instructor still on alert

"With the motivation of children are not problems. Sometimes can be bigger problem to calm them down, "says Korejs. The motivation in the literal sense, then, according to him, is possible to speak since the moment when will be first race.

Pushing, laugh, but most of them are able to concentrate on a key moment for the new task that throws them violently Kamil - whether it is a new way to climb as blindfolded, or even jump from the wall into the seat squab. Lesson of the juice and the kids entertained until its end. At the same time allow them to disperse but to forget the principles of safety, even though the children are scattered all over the climbing wall. Kamil Korejs is the right instructor.

Published: 22.10.2011
Fear- is part human and animal life and the also defence mechanism of the organism. But sometimes it can be more insidious than we like ourselves. This is the right moment to start to fight with the fear, or exactly fight with us. The first type of fear that comes to mind in relation to climbing is the fear of heights.