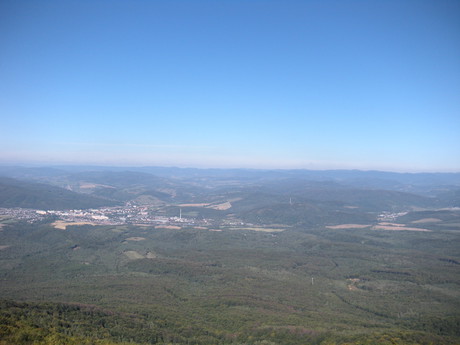 When going from Runina to Snina we had planned to spend a night somewhere around Sninske Ponds, a natural pool. Also, there is a camp, closed unfortunately. Eventually, we found out a quiet place next to the road that is accessible to cars with special permission. There we spend the night, quite adventurously. 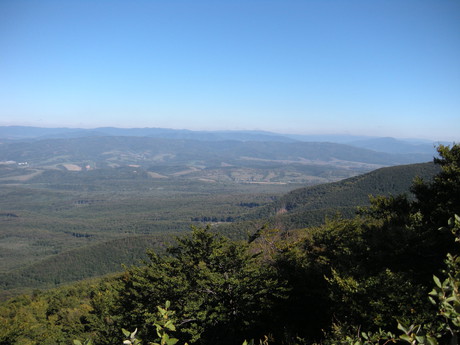 On the following morning a bright and sunny day woke us up. But it was cold. At around 9 o’clock we set off to the first part of our journey. It went along an asphalt road and two hours later we joined a steep forest path. It took us to Sninsky Kamen (1 006 meters above sea level). The sight consists of two outcrops (Velky and Maly Sninsky Kamen ). Atop you have beautiful view of the surroundings. To the north there is Snina and the Bukovske Hills. To the south there is Morske Oko lake. Good weather also allowed us to observe falconiformes flying in circles high above us. 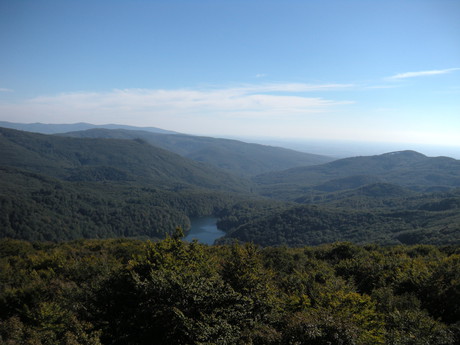 We joined the red tourist trail when we were leaving Sninsky Kamen. The trail led us to Nezabec summit (1 023 meters above sea level). Then we descended along the green trail to Morske Oko. In this section of the trek almost all the time we were going through thick woods. We didn’t enjoy any beautiful view however we enjoyed Morske Oko lake , nobody was around. The landscape reflecting on its calm water surface was breathtaking. No tourists moved around the lake in this season of the year. Therefore, we fully enjoyed silence of nature and its remoteness. Altogether three cottages lined the coast of the lake. Tourists may use two in the summer as accommodation or restaurant. 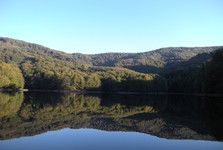 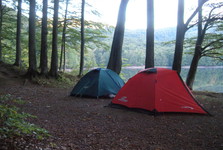 The lake came to be after a massive landslide from surrounding slopes. The mass blocked the Okno river in the area of the the Vihorlat mountains. Its volcanic activity was decreasing. It was declared a national park which hosts protected fauna and flora. Moreover, the lake is the largest dammed volcanic lake in Slovakia. Its area is 13 hectares and at the deepest is the bed 26 meter below the surface. Six permanent tributaries flows into the lake and couple of irregular. Through the Okno River water outflows from the lake. At Senianske Ponds the river flows into the Cierna Voda River.

We built our tents on the riverbank next to a cottage. After the dinner we hung trash in a bag on the iron fence of the adjacent cottage. We did this to prevent us from having an unintentional visit from bears. In no time we got into warm sleeping bags and looked forward for the following day. We were decided to climb the highest summit of the mountain range. You will learn about the result of our adventure next time.