Published: 3.10.2007
It is a former limestone quarry. Alkazar is one of greatest rocky formations in the whole area of Srbsko. You find it near to Berounka-river, orientated to the south, suitable for climbing all year round.

It is very popular place of Bohemian mounteneerers´, especially within sunny weekends. It happens quite ofter that during the weekends-season the place could be overcrowded. A

Big Matterhorn is placed at very edge of a quarry. It is obvious - after you see it for the first time - why its name is Matterhorn. The wall of triangle form is more than 30 m high reminds famous mountain. There are to be found here 14 routes, more of difficult character (stages of 8 a 9 UIAA), anyway, you find one easier route, suitable for less experienced climbers. This perpendicular limestone wall of plate character is amply secured, especially with borhooks. Provided you decide to climb more difficult routes, you do not need to be afraid of possible sever accidents. Attention only - in left lower section, the rock can be broken!

Anyway, mostly used section of Alkazar querry - especially by climbers - beginners - is those part of Left Amphitheatre. Here you find nearly 100 routes of various stage difficulties. Nevertheless, easier and middle difficult routes prevail. The Amphitheatre is divided into three stores, the lower store is most used. You find here more than 50 routes of easy or middle difficult stages ( 5 – 7+ UIAA). Attention - you find also difficult routes, as, for instance „Výkřik do tmy“ („Cry in Dark“) - with difficulty stage 9/9+UIAA or route „206“ with stage 8+ UIAA. The average height of routes in lower store ranges between 15-20 m.

Most of routes are moderately inclinated, with small or middle fixtures mostly of roundish character, sharper corners you meet exceptionally. For fixture serve mostly the rivets and borhooks. However, as it is a limestone in this case, we meet quite often with „slipping“, which arose with often use of some fixtures and foot-boards. The limestone becomes mor

e smoothed and, successively is completely smooth. So, provided you wish to make easier routes, would you calculate with a fact that this becomes rather very difficult as stated in older guide-books.

As to easier routes: we can recommend you the routes, such as: Železití, Přes přílep, Nebojte se hromů and Grál. As to more difficult routes: Černý talár and Zimní slunovrat. Middle store of Left Amphitheatre can be reached as follows: you climb there with some route from low store, or you can go round whole quarry and Big Matterhorn and use a tunnel, which reminded here form mining time-period. This way could be used also, if you plan to found the upper fixture for climbing on low store.However, the middle store is not  often used locality. There are approx. 25 routes of similar character and stages of difficulty as in low store. The height of this wall is nearly 20 m, and it is fixed in the same way as in low store, mostly with rivets and borhooks.

Finally, in the third store you find six routes only – on so called Fifoun´s Plate, and some other,

which are, however, not secured. Further very popular locality in Alkazar-quarry , there is so called Homole (Loaf) or Malý Matterhorn (Small Matterhorn). It is a wall of 30 m height, where you find approx. 30 secured routes. These routes are not too difficult, so also less experienced climbers can enjoy longer mounting with marvellous view on Berounka-river.

As to routes up to Loaf – we can recommend you the routes of names of „Balanc“ and „Svíčková na smetaně“ – both in stage of 6+. For beginners we recommend the route „Hare Krišna, Hare Rama“ – difficulty stage 5-.

Right Amphitheatre is divided into two sections – low and upper store. The routes are a bit difficult as in Left Amphitheatre, nevertheless, the climbing character is similar. The number of routes is not so numerous as in case of Left Amphitheatre.  Anyway, you find here several routes of middle difficult stage. This area is not so used, the reason for it is a fact that the rocks could be broken.

Access: from Highway D5 turn to Hostim and continue up ti the community of Srbsko ( if you go from Prague, turn in Loděnice, if you arrive from opposite part, would you turn away in Beroun on road  No. 116. Anyway, from Prague you can also go via Černošice and Karlštejn ( road No. 116). Further, we recommend you to use a parking in community of Srbsko (at some of local restaurants) and continue on foot against a stream of Berounka-river. After ten minutes walk, you meet first rocky walls – Štítek, Vlastina stěna, Blážina stěna, Stěna kotlů, Červené stěna and Pupek. Would you continue ahead, you meet a foot-bridge over a small brook. After a brook, turn to the left, after couple of minutes you reach former Alkazar quarry.

Accommodation: camping is possible direct under rocks. You can use some of camping places or pensions in Srbsko. 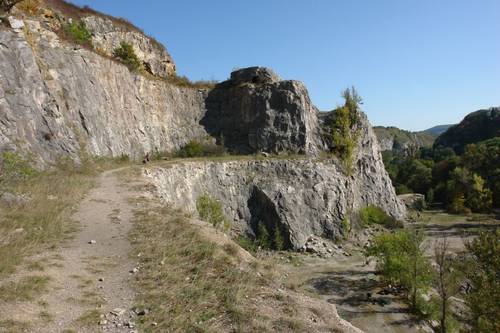