High karst limestone cliffs loom above all of these beaches. They are famous all around the world among climbers for they have a large number of trails. This area is often hit by southeastern monsoons (in our summer). Thus, it is necessary to plan your trip there ahead. 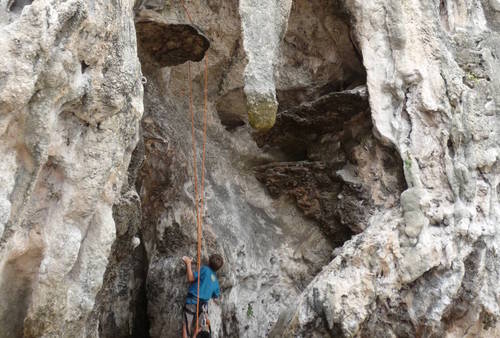 You can get to the peninsula only by the-so called long tailed ship. This type of ship carry 12 people and until you don’t book entire ship, you have to wait for other travellers until they fill every seat. You can get on the peninsula from three ports. - Ao Nang (the ship will unload you on the Railey West, which looks better), Ao Nam Mao and from the Krabi city (the ship would unload you at the Raily East; the beach is shallow and the tide spreads kilometers from the shore so you have to struggle through the shallow water). The Railey West is more beautiful but the Railey East offers much more affordable and at the same time cozy accommodation. 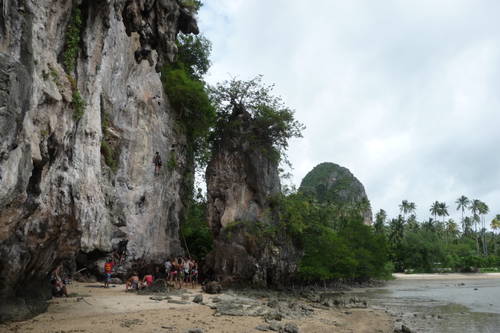 There are 44 climb walls on the peninsula plus trails on nearby islands of Ao Nang Tower, Ko Poda, Ko Yawabun and Ko Chicken Island. Difficulty of the walls vary from 5a to 8c. There are enough places where you can borrow climbing equipment. Climb centers are located at the Railey West, Railey East and even at the Ton Sai beach. You can hire a guide and instructor - 800 Baths per person/day – equipment included (about 26 dollars). Should you have climbing shoues and don’t need an instructor you can rent the rest of equipment (2 persons) for 1000 Baths per day (approx. 33 dollars). Indeed, you may hire a guide for 600 Baths (ca. 19 dollars) when you rent equipment. 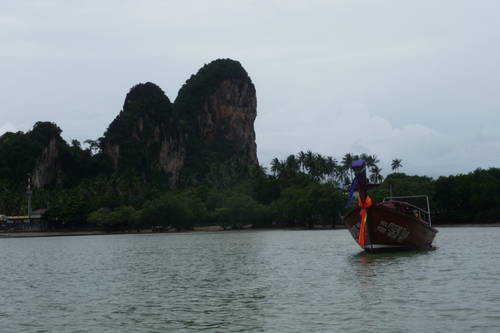 The most popular climbing walls are Muay Thai and One -Two - Three on east of the Railey East, the Pra - Nang beach area located on south of the same-named beach (No 13) and Ton Sai Wall and Roof  on south of the Ton Sai beach (No 28). It is a high-quality orange rock with some stalactites on it. Advantage of the Muay Thai and One - Two – Three is they are in the shadow all day. The cliffs are divided into two parts, the bottom is very safe. The trails herea re 5 – 7b, often climbed. Beginners who haven’t climbed before like it most. This means these walls are extremely overcrowded and the best time you can visit it is after 4 p.m. The upper part of the cliff has an overhang so you can climb there even if it rains. The overhang is not recommended by climbing centers and it is even forbidden. A look at old loops in walls will only ensure you about this recommendation 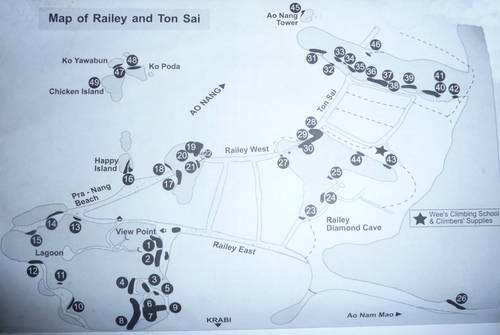 The trails have belayers and rivets on every 1,5 meter (sometimes even loops that are firmly attached to the wall). Stands are made of loops and they are secured with three points – a combination of belayers, rivets and loops. Climbing there is pleasant and easy

So if you decide visit the north Railey East along the shore on heading to Ao Nam Mao you would most likely spot some lonely beaches under high cliffs. There you can undisturbed train bouldering. 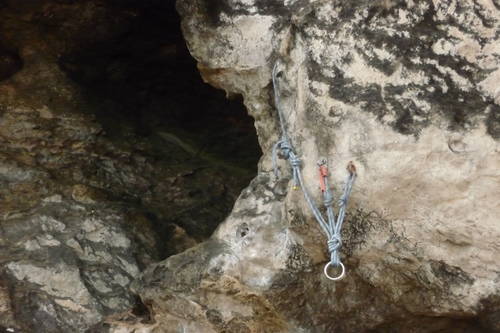