en.infoglobe.cz » The Climbers As An Animal Genus? - VIDEO

So to be compared to athletes who are rightly considered to be intelligent, their number one sport - athletics has attribute royal sport, is now climbing, open almost all the fun. It is hard to imagine that the athletic ovals and a lot of hard work for break of seconds or one centimetre attracted to the masses of enthusiasts. Climbing in the form of today's commercial but it has such power. 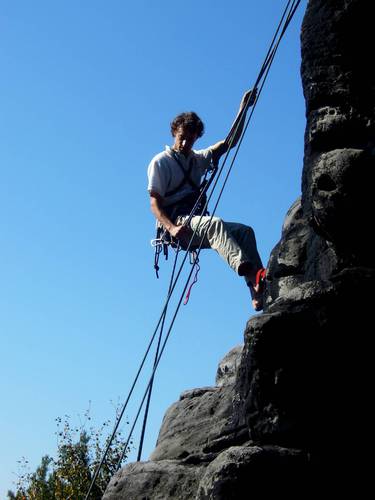 Pure climbers give up against commerce

Until they were climbing the walls in cities, climbers were very specific group. People with fixed principles, who sought satisfaction in conquering mountains or peaks of magical rocks. They are people who fought against nature, but mostly with themselves, internally very mature and strong, but also those who had to die to chance their dreams. In the group of people, who call themselves as a climbers, are not that many.

"People who climb on rocks or in the mountains have a life perspective. The way in climbing how they solve the problems joined with the immediate threat to life, such as those common problems that can cast the rest of us, moving half-heartedly and as I said in perspective," talks about his colleague Kamil Korejs.  "It's not the rule, rather than by those who once a week they go to the climbing wall. It concerns mainly climbers, who gave it all and are truly absorbed in climbing, "explains his thoughts.

While climbing get closer to people, but it does not mean that it would lose its charm. But not everyone who climbs on each other can declare: "I am a right climber and quietly die to reach the top of mountain."