With my husband we quite often go on route between Bratislava and eastern Slovak town of Sabinov. To this was not just boring move from point A to point B, every time we try to brighten the way visit some interesting places or cities. Last time we had chose for our "intermediate destination" the former royal town, now a small village of Lednice, which is hidden in the valley of the same named brook in the White Carpathian Mountains, just jump from the highway D1. It lies on the northwest of Slovakia, near the border with the Czech Republic. Belongs to Trenčín region and from the town of Púchov is about 16 km far. 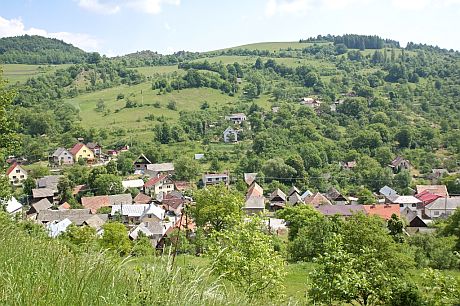 Like for most visitors, as well for us was the main attraction of the eponymous ca

stle ruins of Lednice, their dating back to the middle of 13th century. But as we found out, village can offer much more for tourists, really. Today's ruins of Lednice were once border castle defence, serving to protect trade routes leading to Moravia. Turns on the sharp edge of the limestone cliffs and its location is reminiscent of an eagle's nest. Like most castles, and during its exi

stence, this was replaced more owners, let´s say Podmanickovci brothers or Rákocziovci. In 1710, however, the imperial army burned it, and since the time the castle was in ruins. Today it is a sought-after tourist destination trips. Perhaps the best starting point is the signpost at the church in the village centre, where it is on the fridge with the ruins of the castle rock, a pleasant walk of about 20 minutes. Just before the entrance to the castle on the small terrace is dirty wooden table with bench. Even though, it's not exactly the most attractive place in the neighbourhood, definitely worth it to take a little break here. There is a beautiful view of the village and its immediate surroundings. However, if you are lovers of beautiful views, certainly claim a rock above the castle. The most beautiful view of the White Carpathians and the adjacent part of the nature you have right from there.

Other attractions of Lednice

Except the castle you should not definitely miss a visit to the local church, which dates from 1735 and is dedicated to St. Jan of Nepomuk. Near the village of Lednice is extremely rich for natural beauty and interesting scenery. Lednice is an ideal starting point for day trips to the rocky part of the White Carpathians. From the geomorphological and geological point of view are very interesting, "Lednické rocks", which form a very significant element of the local landscape. Walk to them you will not take more than half an hour. Another pleasant trip is a walk along the hiking trails around the refrigerator, which handily in about 4 hours. If you're more of a believer in mountain biking, the surrounding terrain will definitely not disappoint. In winter the nearby of village is to change a paradise for lovers of cross-country skiing.

Unfortunately, we hadn´t enough of time to visit this beautiful part of Slovakia, but despite that local nature charmed us enough to know that we will come back, definitely.