The „Teichs“ (ponds) are artifically created water reservoirs, constructed within couple of centuries in the surroundings of Banská Štiavnica, serving as water sources, and as energy

springs for motion of mining machines at excavation and arrangements of ores. It was hydro-technical solution,which was, in essential way, influenced  existing ways of precious ore in Banská Štiavnica region mining. A base of water-economical system in Banská Štiavnica area, placed in perimetre (it is water flow collecting area) of river-basin of Hron and Ipel rivers. In a region, where the other great rivers do not exist, mutual connection of water reservoirs by means of open ditches and water galleries was done. To precipitations´ catching served very sagacious system of collecting drains, led in such way, in order to bring the water inside the reservoir from one river-basin into another one. From these ponds, the water was conveyed, by means of mill-races, for multiple use, towards mining drawing machines and equipments for ores´ arrangement in crusher. So, since beginning of 16th century up to the end of 19th century, nearly 60 water reservoirs, containing seven millions cubic metres of water, were constructed in the region. Approximately forty of them served to needs of mining activities, the rest served for drive of various non-mining equipments or for inhabitants´ supply with the water. The length of these seized trenches reached up to 72 kilometres, distributed ditches and races were long even 57 kilometres. Thanks to this water, the mines in Štiavnica could start to introduce water-pillar machines. In the middle of 18th century, these machines became most economical motors of all over the world. So, the question of mining waters´driving was solved in this way for next one hundred years. At that time period, Banska Štiavnica used most progressive technology of the whole Europe. Later, the steam and the electricity substituted this system, and the ponds begun to loose its original function. 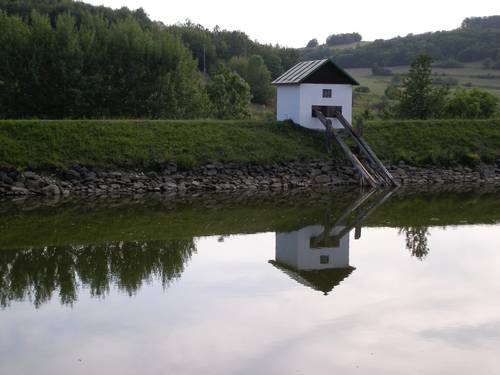 ew Cornelius Hell (1653-1743). He built there (within 1712-1715) Velká Windšachta Pond, reconstructed and enlarged Eve and Spodna Windšachta ponds, and constructed seven drawing equipments for water motion. He drew, within quite short time period, by means of such equipments, all waters from all inundated mines, enabling new development of mining branch in the region. Nevertheless, Samuel Mikovini (1686-1750) became a decisive follower of water reservoir constructions in Banská Štiavnica region. He projected, built and reconstructed most of water r

eservoirs, including extent system of surface collectiong basins and subterranean connecting galleries. So, he created finished water-economical system of basins, which solved definitely the question of energetical base of mines in Banská Štiavnica mining ground, not only for the rest of 18th century, but till the beginning of 20th century. So, the original water-economical system, containing more than 50 reservoirs and nest of leading ditches and races, water galleries and other water-economical objects. About one half of water basins preserved till now, despite the fact that their economical function was changed in the meantime.

nt is put in their safety. At present, there are constructed, at the same time,within scope of their renovation, new bottom flood-gates and safe weirs, inevitable for following manipulation with water inside basin. So, the ponds could not threaten the area, placed in basin neighbourhood. Main target of ponds´ reconstruction is to secure their function. On the other hand, water-economists follow quality of the water in basins at the same time. This fact enables - afterthat, when its original function was lost - to use their potential even for new social-economical activities. So, the ponds could be one of basic phenomenons of development of tourist activities in Banská Štiavnica region. In order to fulfill this target, very well coordination of all interested parties is required, operating in travelling branch (starting from Banská Štiavnica up to various subjects, active in this branch). Although these water reservoirs do not fullfill their original mission at present, they did not lost its importance even now. Some of them are being used as drinking or useful water reservoirs. Most of them are used, during summer season, for holiday and relax purposes, some for sport fishing, and some do not have any concrete use. Collecting and supply ditches are mostly out of order. Now, the bodies of ditches are being used as tourist marked trails, some as forest or field assisting paths, ski running routes. Most of them is not marked in the coutryside, and many are not to be distinguished at all. 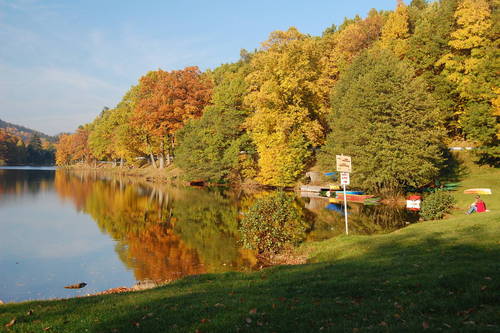 Despite this fact, all existing water reservoirs, including other objects, have r

elatively great water-economical importance. Its importance is to be presented even in wider correlations. The reservours beneficently influen

ce climatic conditions of the environment, where they are situated (integrated), act in positive way to air humidity of the millieu, diminuish the differences between day and night temperatures, especially in summer and in autumn, and last but not least, they have slowing effects for dry winds. So, from this point of view, their new function is growing, especially as far as holiday relax centres are concerned, composed into countryside.