Their importance is based in its bio-geographic position, on the border of calorifacient (Pannonian) and cold (Carpathian) mountain sorts of fauna and flora.

Last, but not least, in Štiavnica Hills could be found many historical and technical places of interest, dispersed in free countryside, first of all concentrated in central part of mountain range.

Sitno Highland, with its highest peak of Sitno (1009 metres above sea level) expressively arising above surrounding countryside, is the highest part of Štiavnica Hills. Its upper part is limited, from three sides, with eighty metres high rocky walls. So, Sitno presents an expressive country landscape dominanta. You can enjoy wide circular view from its top. Nevertheless, there was declared (on top part of Sitno massif and adjoining slopes) National Countryside Reservation in 1951(its extention makes 93,68 ha). Several marked tourist trails lead you to the top, Sitno Educational Path, first of all, which starts and end on Tartar Meadow, 2 kms distant from bus stop in Počuvadlo Holiday Area. Počuvadlo is one of well-known ponds - mining water reservoirs - in Banska Štiavnica Area. The passenger has, within  two hours´ walk on terrain of middle stage difficulty, to overcome 150 metres exceeding, pass 3 kms distance, and as a reward, he gets a lot of information on thirteen pannels (tables) on the way. 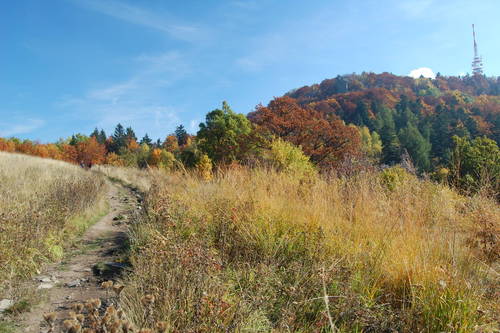 A look out tower from 18th century is open for public on Sitno top (since May till September). Now, you find there tourist information centre and a base if Preserved Countryside Area Administration Office .

Inside the building, there is placed a small exposition of state nature protection. Except the look out tower, there is to be found there also TV sender and a building of the 2nd TV programme. Sitno area is taken for a birthplace of European tourist movement. The first tourist club was established here just in 1860. Moreover, Sitno is a unique locality, where a lot of archaeological materials, representing time period of younger bronze era, Lusatia era, as well as Middle Age era, were concentrated. All this, presents, together with neighbouring town of Banska Štiavnica and its technical monuments, the ideal supposition for the developemnt of various sorts of tourist activities.

Sitno forms a rest of lava stream, made from andesite. This rock mineral poured out into old valley, created in more soft tufs. After tectonical lifting of the area, the erosion came, whereas lava rock mineral remained in its upper position, whereas all these less resistant minerals crumbled away more quickly. Such relief inversion (change) is very characteristic for all Slovak volcanic mountain ranges.

Sitno massif is typical for its change of Pannonian and Carpathian flora. On warm sunny andesite rocks, with its soft soil, there are to be found the elements of xerotherm flora. You can find on several stands great pasque flower as well as crocus manycoloured. From animals´ empire, you can meet  here, for instance, eagle crier, kite, owls and many sorts of singing birds. Apart of this, you can follow rare mammals, such as lynx and wild cats. To most striking sorts of insect belong butterflies, such as swallow-tailed and swallow-fruit, or rare praying-insect, stag-beetle or Alp musk-beetle. Sitno Area is, with exception of its eastern part and highest top, completely afforested. This area presents highland afforested countryside, which fulfills its forestry-economic as well as tourist function.