en.infoglobe.cz » Places of interest » Slovakia: Bratislava From Above

The New Bridge construction was completed in summer 1972 as a second bridge over the River Danube on the Bratislava territory. At that time it was called the Slovak National Uprising Bridge and right from the beginning of its existence caused much discussion. One of the reasons of fight is its location. Maybe it is a true that since the immemorial crossing ford used to be on the same place already in Austria - Hungary time, which is confirmed by historical drawing of the city, but construction of his successor in the second half of the 20th century, however brought more negatives. 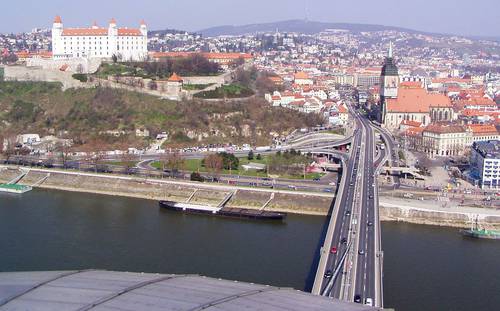 So at first, to the city center has brought the main traffic flow from Petržalský shore, where was already built a huge settlement for tens of thousands of people. Later was more and less managed to divert the part of a traffic to the others bridges (on Danube are four bridges in Bratislava, which leads traffic, the fifth of them – called Old bridge – is currently closed and local people waiting for decision about its future, to build more bridges are being considered). Much larger negative effects that won´t be never fixed probably had a construction of a bridgehead on the boarder of Old Town along historical walls, where was destroyed several streets with original buildings including the Jewish synagogue.

The actual bridge is less than half a kilometer long and from far away you can see suspension system on a single rope on only one “bipedal” pylon. This solution eliminated the need to construct of bridge pillar in the riverbed of the Danube, which would obstruct ship transport. The bridge is double deck, through the tunnel under the road leads utility lines and on the bottom part are partially covered walkways for pedestrians and cyclists. 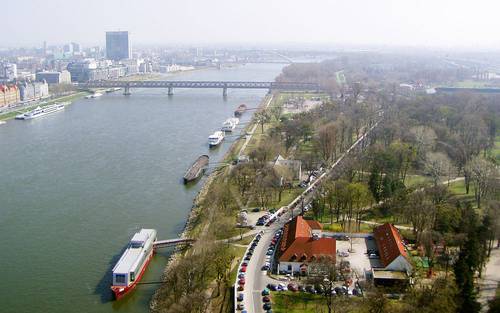 If we will go to out of town on the left sidewalk, we come to the “foot of pylon”, which hides speedy lift inside. This one - after paying the admission fee – will take the visitor up to the height about 80 meters, where is placed a lentil shape body with average of about 30 meters. Inside you can find the restaurant (formerly Café Bystrica), from where is through big windows a unique view of Bratislava Castle, the centre of the city and its surroundings. Restaurant was named UFO. 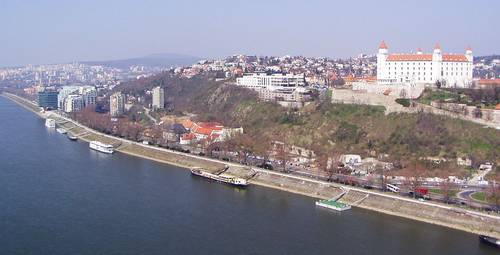 From the reception opposite the elevator leads doors to the staircase inside the second foot of the supporting pillars, which take you to the observation deck on the roof of the restaurant. In the communists regime was this platform closed for the public, today it is one of the most beautiful view points of the city with majestic Castle right in front of us and high above the another buildings in the historic city centre. Hopefully it can be seen on the attached photos, even though at the time of our visit the weather wasn’t that good and even the strong winds couldn´t disperse clouds over the city of which ones a time lit up the spring sun. 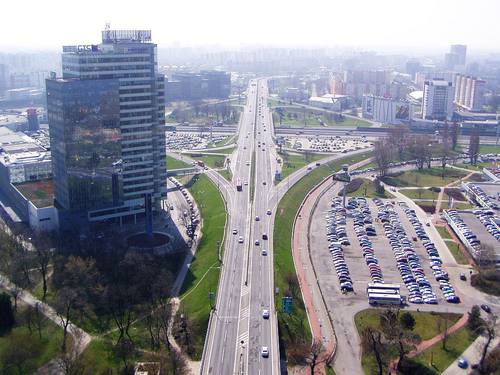