en.infoglobe.cz » Places of interest » SVK: Bratislava - From Invention Of Wheel Up To Contemporaneity

As an interesting matter of this Transport Museum, it is a fact that it was founded, first of all, by merit of enthusiastic persons who were interested in historical monuments (sightseeings), especially in motor vehicles and motorcycles, collecting various railway equipments, being out of order, including telegraph technics, or they gave time to railway modellings. So, within 1990 - 2000, an idea was born, that all such subjects could be put into loose store spaces in the neighbourhood of Bratislava Central Railway Station. Apart of this, one local side-line rail enabled even a presentation of big railway subjects.

Although the museum is situated in direct neighbourhood of railway station, the museum-entrance would be looked from the opposite part - at the corner of Šancová Street, close to Prague Street. A presence of transport technics draws the attention

(from its first view) to a collection of old lorries as well as serviceable vehicles, located in front of typical old railway store building, constructed

from red, non-rough casted bricks. The first hall is dedicated to the beginning of transport, starting from the invention of the bicycle and classical wheel-barrow, up to copies of the first wheels. The development continues with introduction of the oldest motor-cycles, motor-three-wheel engines and historical cars. The icon of modern car-era, FORD T, is represented there, even the oldest Czechoslovak vehicles, such as: PRAGA, TATRA, LAURIN-KLEMENT, AERO or WANDERER, do not miss, followed by historical motorcycles, including three-seat BÖHMERLAND, with its respectable dimensions.

The second wing of entrance hall reminds a tradition of raiway transport in Slovak territory, including technical equipment (outfit), from distribution of classical paper tickets, via various signals, up to securing and telecommunicat

ion technics. This one is represented with ancient telegraph, different types of phone devices, all such equipments for the history, now. As an interesting object, it is a dresine (trolley). It is passenger motor vehicle, arranged to a drive on rails.

Before we pass to the neighbouring hall (building), let´s have a stop on „platform“ (it is, in fact, former railway sloping drive). Several steam engines could be admired there, including one motor engine and post-office waggon, where a model of „children railway“, and different small trains of various types are installed, whereas the surroundings, with more rail lines and tunnels, bars (bolts) and points, imitating real picture of Bratislava Central Station could be seen there. Inside niche of former store (now, m

useum building), a statue of St. Catherine of Alexandria, including wheel-fragment, is placed. St. Catherine was acknowledged as a patron of Slovak railway-men.

The second hall is exclusively specialized for motorization. You can admire there the survey of war vehicles, starting from American jeep up to specialities of German „amphibian

vehicles“ or special belt-vehicle, suitable for mountain terrains. Next section, named as „Nostalgy on Two Wheels“ reminds after-war tradition of motorcycles´ production, including small scooters, manufactured in Slovak factories. You can see there a unique survey of first machine series, which were intended to be

introduced into serial production in Bratislava car factory, such as. various types of ŠKODA vehicles, a suggestion for production of microbus, presented on TATRA 603 under-carriage, as well as first models of serviceable vehicles, the works of Slovak ingenieurs and technicians. However, such types of vehicles were never introduced into standard road traffic. It is known

that production programme of former Bratislava Car Works (BAZ) was definitely fulfilled even at the beginning of 1990. At that time, this car factory was handed over by VOLKSWAGEN Group. The collection is represented with its first models, such as: VW Passat Arriva Combi and VW Touareg, serial number 1 000 000, manufactured in Slovakia. In back section of the hall, the visitors can return again to nostalgic memories, presented with films of 1950 and 1960, when mainly the roads in America were full of CADILLAC and MUSTANG cars. Nevertheless, nowadays, these vehicles form the decoration of car museums or veteran old time cars´ demonstrations. 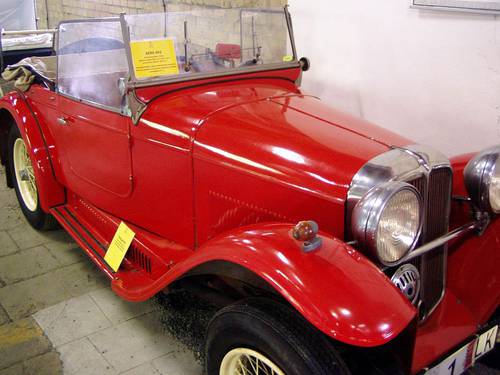