Another thing deeple connected with Kladno is Poldi steelworks that spread out on vast area on the biggest city of the Region of Central Bohemia and employed thousands of locals. Kladno is connected with heavy industry for a long time. It is no coincidence that the second railroad in Bohemia connected Dejvice (in Prague) with Kladno. Ten year earlier (1830) the railroad was predeceased by horsecar, which mostly transported wood. Poldi steelworks were established in 1889, and soon after the city’s population, importance and area were rising. Today is hockey that makes the city significant, becase famous „Poldovka“ bankrupted due to fishy privatization.

We will explore the compound of former steelworks some other time. Today we will tell you more about better part of the city, its historical center and the castle of Kladno . 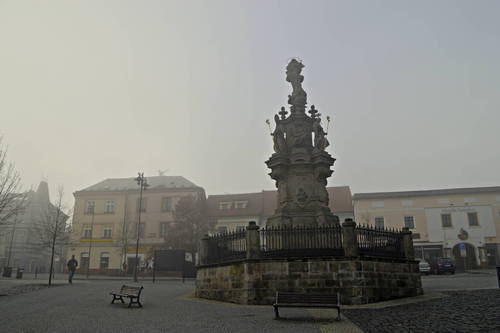 In Kladno or On Kladno?

The Mayor Pavel’s Square and Kladno itself were covered by a mist, despite the fact that only few kilometers away, in Prague, the weather was beautiful and sun shined. The mist is simply typical for autumn in Kladno. Or on Kladno? According to locals, rather “on Kladno”. However, according to grammar rules this interesting wordplay is corrected to “in Kladno”.

Let them have their “on Kladno”. Today is the mist more powerful then sun. Sunrays try to break through clouds to make day more cheerful. The historic center of the city is thus more interesting. On the square you can see a historic column by Karel Josef Hiernle and architect Killián Ignác Dientzenhofer. A masterpiece built in 1741.

The square is dominated by a church

Significantly higher buildings unequivocally dominated by Church of the Assumption of Virgin Mary, matching with its size a growing city, were not so good visible in the mist az above-mentioned Mariánský sloup (a histrocial column).

So high and spacious church was built  in Kladno as late as in 1899. Two years before church’s completion services took place in old and many times repaired small church. It the symbol of the city hasn’t been Jaromír Jágr, a hockey player and the owner of „Kladenští tygři, hockey team, the symbol would most certainly be the church standing in the middle of the square

The atmosphere of bad weather and hockey spreads between historical buildings which are surrounding the center of Kladno Even the city hall built in the style of Neo-Renaissance, otherwise the most lively place, had been little bit shrouded in the mist. 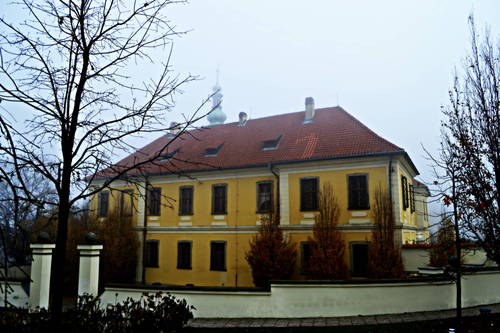 The oldest building in Kladno- the castle – is guarded by bears, or rather one bear that looks bored by his stereotypical walk in his limited territory. If he hides his friend inside, the bear didn’t reveal. Instead he found something to eat and he returned to his lair. Originally there should have been two bears – Marta and Míša, formerly lady bears of Ukrainian circus. However, we had seen only one lady bear and we don’t know if it was Míša or Marta… 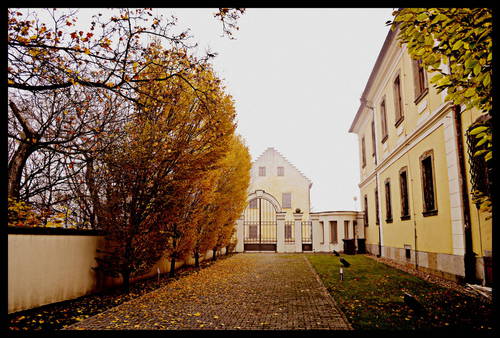 Bear(s) are in castle gardens that are free, however, you should check opening hours because you can easily lost track of time when you walk there. The same applies to art exhibition in castle gallery. The Kladno Castle is located at the upside of the Mayor Pavel’s Square .

Come with us to see the oldest church in the Czech Republic - Budeč. Its core was built in 11th c...