Only one pillar remains as memory of once massive building. It would be the youngest monastery in central Europe. Still, it has indistinguishable atmosphere, regardless it is a fracture of its former glory. It can offer a lot to those who know it.

One is certain – a monastery was located at this place. Not in Klasterni Skalice but just in Skalice. It remained true to its purpose despite it didn’t fulfill expectations of its founders. With its construction great plans were about to be realized.

Bishope of Minden, provost of Vysehrad and Charles IV chancellor established the Cisterciate monastery in 1357. The famous emperor visited the place located near Kourim to see placement of the corner stone. Allegedly Bishop of Olomouc, Jan Ocko of Vlasim, the first Czech cardinal accompainied the emperor. Great expectations often mean great privileges and the monastery in Skalice had them. 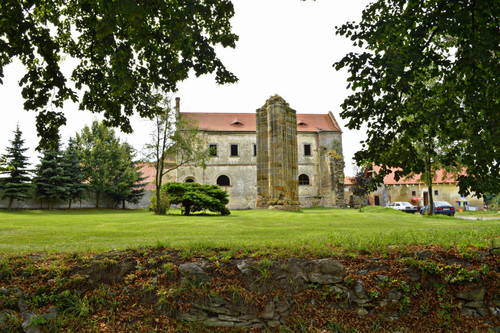 The steel mill of Matyas of Arras took part in expensive construction of the monastery. The mill even ceased works at the St Vitu’s cathedral in Prague Castle. Lter the construction of monastery was financially aided by King Vaclav IV. Thanks to him fifty monks who lived there had quite good living conditions. First dozen monks came from monastery in Sedlec.

The End of Golden Era

In 1421, the Hussites interrupted the great plan for their destroyed the whole monastery. Later, several intiatives took place to give back life to the monastery. In 1690, a simple convention with a chapel of the Virgin Mary was built. However, nothing reestablished the monastery and it was abolished definitively in 1783.

Later, the convention was rebuilt to a castle. Today its ruins are a private property. The castle served for agriculture purposes, ruins of the monastery were cleared away in 1840. The only thing that was preserved until the present is the chapel in pseudo-Gothic style. 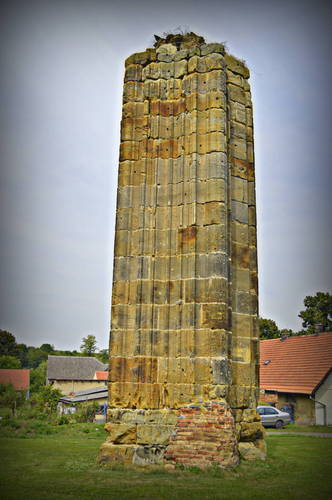 The aforementioned Gothic pillar is made of red sandstone. The decorated pillar lonely standing in Klasterni Skalice is supposed to be the work of Matyas of Arras. Today it is four meters wide and ten meters high, however, it used to be ten meters taller and it supported a crossing of a longitudinal nave and transverse nave of the Merciul Virgin Mary church.

Secret of the monastery

Almost everybody knows monastery secrets, or at least the term. Only few know where this liquor came to existence. According to locals it was in Klasterni Skalice. Locals are proud of their hometown. A man chopping grass around the ruins was talking about life in the then settlement. 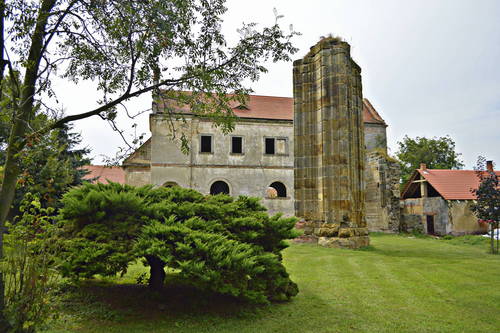 Local „chopper“ raised his finger and mentioned the Monastery secret. A liquor made by Krasne Brezno, a liquor company. Expresident Vaclav Klaus regards this delicious liquor as a liquor of youth. The liquor origin of which we found here, in Klaserni Skalice, is made of nineteen herbs and local and oriental spices. Regardless whether it is true or not, the man looks like the secret is no longer a mystery for him. So, it is up to you if you believe him or not.

Builders of a monastery in Klasterni Skalitsa, at that time simply Skalitsa, had big dreams. Even...