A life in a place located about 40 kilometers from Prague is entirely different – peaceful and organizes. Despite crazy weather this year fields are waiting for the next season and people in Liblice smile. Liblice is closely related to agriculture from the time immemorial.

Two locals are debating by a small tractor with the same energy as clouds are gathering above their heads. Spring is waking up very slowly this year. Heavy rain is replaced by the Sun for few moments and it hid again behind growing clouds.

But Liblice Castle, local landmark, works in any condition. A life in Liblice Castle is nonstop regardless season. In 2007, its renovation was finished and now it operates as a place where are held conferences as well as educational and cultural events. It operates also as hotel, wellness and restaurant. Since 1952 it has been administered by the Academy of Sciences of the Czech Republic . 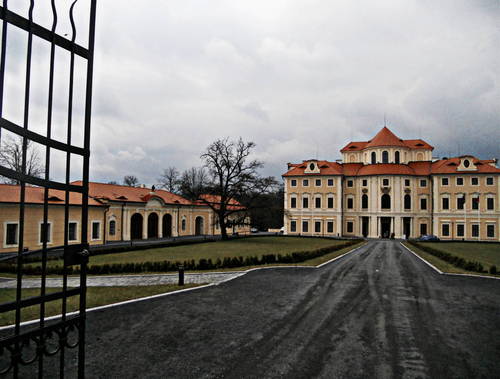 You can get to the garden of the castle for free every day. Believe us that few moments in magical landmark of the Czech baroque period can give your soul, tired by a long winter, energy for several days. Adjoining game reserve is best for a bike ride but you can pedal further. 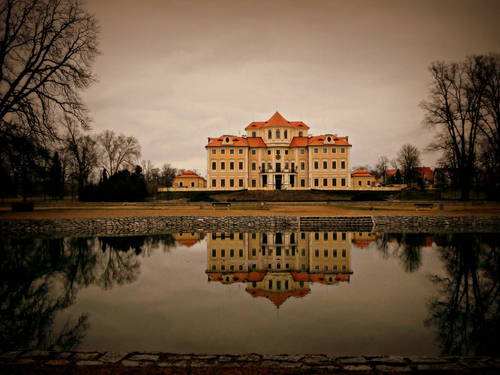 A natural trail leads visitors around the castle and returns them back to the castle garden that is well-maintained. Few infoboards will tell you many things about Liblice. For example, Liblice Castle is called a pearl of baroque and the man who ordered its U shape was Arnošt Josef Pachta of Rájov who built it during the years 1699 -1706. He hired Alliprandi, an Italian architect. His work was later an example for similar buildings in Bohemia. We have already visited few of its successors such as Veltrusy and Chlumec nad Cidlinou. But among others are also the hospital in Duchcov or Karlov, a hunting castle. . 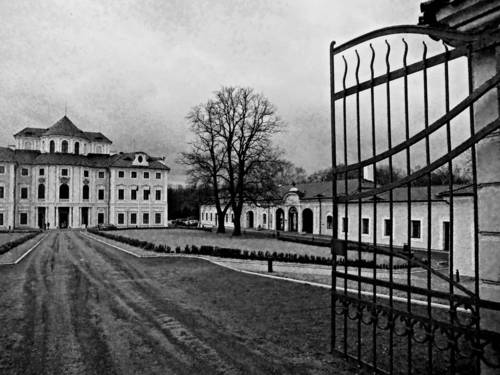 Originality in the past and the present

The entrance to the castle via the main gate is really monumental thanks to its wings. Every wing has four entrances marked with the letters A to D. In the righ wing there is a wellness, a wine bar, and a restaurant. Interiors of the castle are opened every Sunday at 12 o’clock and at 3pm. It is possible to arrange another term but only for groups of at least 10 people. 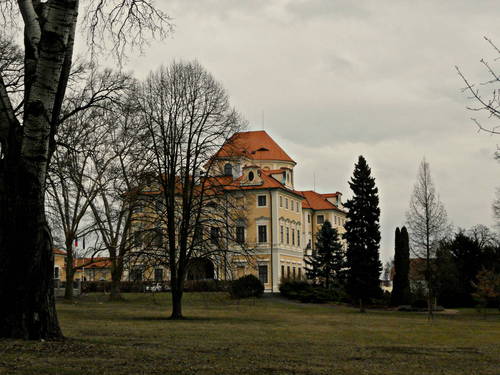 Liblice takes care of its clients, it actually spoils them. It is no coincidence there are also horses at the castle. Since they have nothing better to do they just lay calmly in mud and rest for now. When weather will improve they will be engaged in life at the castle. In their free time clients can learn how to ride a horse or take a ride to the game reserve in a coach or, if they feel to do so, just in saddle. However, its not the last thing Liblice offers. You can pay for a helicopter flight with a landing right in the castle garden, or a balloon flight or a ride on a large tractor or four-wheeler. 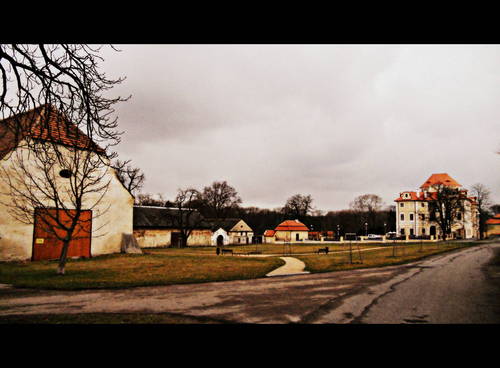 It is not only the castle that is worth seeing in Liblice. Also interesting is the St Wenceslas church that was built in the year 1384 or the statue of St John of Nepomuk that stands in front of the church. The Virgin Mary chapel that stands by a busy road to Mělník will also try to capture your attention.

Mesice is a small village near Prague, significant due to the extensive castle complex. The famou...