Everything seems to be rather more joyful in rays of the first spring sunshine. However, Neratovice main square is not decorated with any statue or ancient town hall. Concrete fountain, erected there in threatening way, is the only decoration which is worth to be mentioned. Nevertheless, Neratovice has another speciality: railway line is passing throughout the square. You can see there red lights, signalling that red-yellow personal train is just passing, instead of coffee houses, confectioneries or small pubs.

Railway Instead of Statues

A stop with inscription: „Neratovice-Town“is situated in distance of approx 100 metres from main square. Except official crossings, the people „created“ several unofficial ones. A barriere, separating neighbouring park from railway corridor, is situated on the earth in several places, and local people make their path across rails shorter. Nevertheless, travelling by train belongs to most comfortable way. Apart of this, it is worth to use a bicycle, for transfer in shorter distance, in Polabí plain-land. 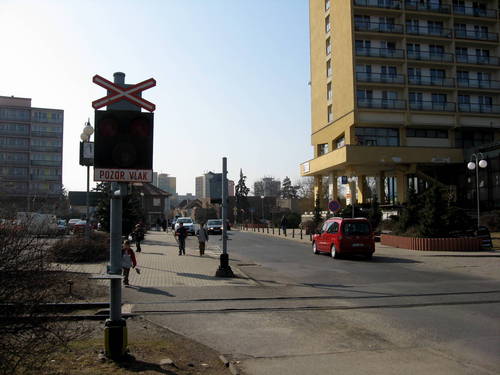 Main boulevard is surrounded with panel dwelling houses. This highest one, decorated in yellow colour-shade, serves as Town Hall. In the groundfloor, you can find a place where an older man, passing by, says, laughing: „Cold weather or hot weather could be, the visit of pub is always worth to be done!“ The other panel house, situated in the square, takes „Tuzex“ name. Apart of this, you discover there great swimming pool with water-chute.

„I am living here for more than 40 years, and I can say that local life is quite busy. You have the choice from a lot of sporting grounds, library, culture centre with two dancing halls and a cinema (movie), presenting performances even in 3D!“ - a pensioner describes local activities. Except of this, you cannot see any other places of interest. In past, Lenin statue was there. „All such panel dwelling houses were constructed here, thanks to Spolana factory, which was built in 1954!“ - he adds. 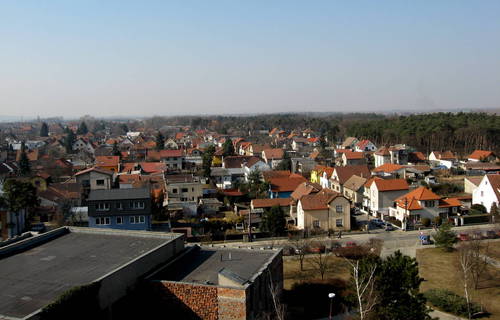 Lobkovice - some strange honour to Palacký?

Neratovice has, as some quarters, another communities, which are more picturesque, making comparison to its industrial part. As most popular, there is Mlékojedy-village, situated along opposite bank of Labe-river. The connection is effected by means of railway bridge, serving as passenger foot bridge at the same time. Mlékojedy became popular thanks to inundated sand-quarry, frequedntly visited mainly during summer saison. Lobkovice is the other locality which is worth to be mentioned. Here, you can find a tomb of František Palacký, Nations´ Father. Close to the church, behind the wall, where the founder of modern Bohemian historiography is buried, big boxes for classified rubbish are placed. Apart of this, a pub, rusty plate with two posters as well as old shop of foodstuffs, closed for reconstruction, is to be mentioned. 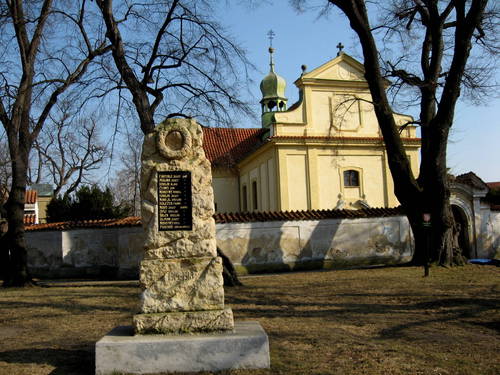 The chimneys of local greatest factory complex are to be followed from all parts, indeed. Even the air, creating total impression from this area, is smelling in not too positive way. However, Neratovice was forced to pay its terrible tax for presence of such complex. This factory, which was in past a promise for economic stability of the region, pressed into peaceful Labe -countryside, where the pine-trees grew, its unprecedented scar.

The history of vast chemical factory, producing cosmetics for motor vehicles, pure chemicals and poisons against offenders, chlorine and similar sublimates, started its production shortly after finish of the 2nd World War, in 1946. After one year when war raving was over there, power station for coal, waterworks and hydro-electric power station were constructed. Shortly afterthat, the nationalization was effected, and the factory got its actual name - Spolana.

The factory was enlarged. During 1960-1980, when leaders of all works reached their rich profits, the other extentions were effected. However, the company success had to be compensated with frequent diseases of its employees and extent infestation with dioxins and other injurious stuffs followed.

In 2001, Greenpeace Movement critized very hardly bad atmosphere around Neratovice environs. One year later, their efforts were supported with catastrophic floodings, and, as a consequence, the factory was hardly damaged. Nevetheless, even six years later, Spolana became one of most pollution bodies with cancer-forming stuffs.

Although Spolana, at present under leading of PKN Orlen, Polish concern, mentions in its message a care, regarding influence for living environment, as the priority, you can find there the details about tonnes of sulphur oxide, dissolved in the atmosphere. So, the number of 856 does not sound in any encouraging way.

Mesice is a small village near Prague, significant due to the extensive castle complex. The famou...