Žebrák (beggar) is real beggar in comparison with Točník, such a poor relative. But from afar for trying a wide circular tower, which would probably marked the layman like a chimney. The trees are then hides even one such, but not so high. Among them once the palace stood - high above the city and a Mill stream.

March slowly got for its half, but the sun was warm as in summer, so on the Žebrák castle is lots of fun. As a destination was chosen by dozens of tourists. All of them crossed the bridge, admire the romantic view of sheep grazing in the castle and sharper hike in the hills, took a look at that, where for the most famous Czech king Charles IV. lived short time. 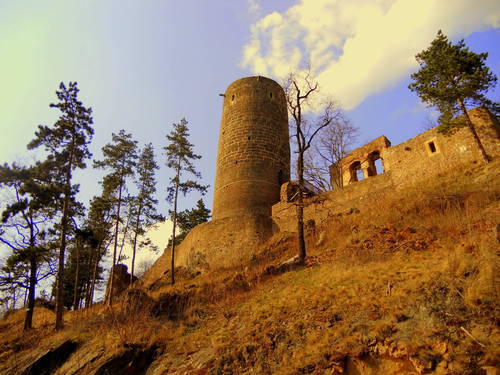 Cash remained closed, and so the history of the tangle remnants of stone walls, various bridges and crossings, perhaps even a drawbridge and two broad chimneys standing on a narrow rocky ridge, interpreted in their own way. For long minutes staring into the region and one does not think about that just for this place to its strategic location on an important business trip to Nürnberg and Rhineland loved Luxemburgs was under their rule the most magnificent residences in the country.

The castle left in the second half of the 13th century to build a family of Zajíc. Soon, however, moved for the better - to Budyně above Ohře river, and sold the castle Beggar Luxembourgs. During their reign the castle became a royal beggar. First, the younger sons of John of Luxembourg Henry cared about it trading immediately after the later King Charles IV., but which the Žebrák son and he died there since that time, too much bother. 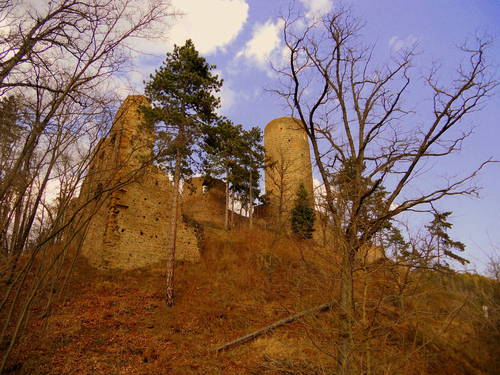 But his son Václav IV., obsessived by passion for hunting found in the countryside near Beroun affection and therefore had the castle rebuilt in order to feel comfortable there. But then someone clumsily struck a match and burned the castle. Vaclav gave up his re-reconstruction and decided to build a comfortable castle Točník. Although the Žebrák was repaired and even stand the Hussite wars, but the real manor life back into it ever again. He later worked as Točník forecastle, at the bottom was even a brewery. 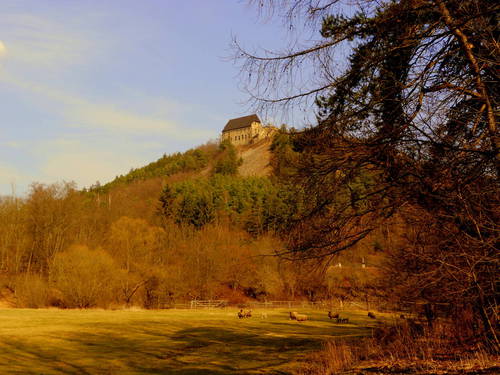 Even today, the beggar rather a complement Točník, which tourists can visit often forgive, unfortunately. It is interesting to see how we can build a giant bit uncomfortably close to the ridge, look into the black dungeon of the tower or Točník look at where you, dear readers, we introduce exactly one week.