That day the area of Kladno was submerged in the mist and the red touristic track up to the church of St Peter and Paulsu was quite adventurous. The weight of water caused that webs of little frozen tree inhabitants fell down. Meanwhile sun tried to break through the thick fog, however, in vain. Far and wide you couldn’t see a man. Only sounds you can hear in surroundings told you there was some life around. There is nothing emerging in the distance so far, the visibility is good only on few meters ahead. Everything else remains a mystery.

Same is true for the place we walk to through a thick fog. Despite long archeological research it still remains sort of mystery. Provably as far the 10th century there lived Czech ancestors. How they lived, we can just speculate. We can base our speculations on findings, put links between them together and create stories to tell our children, so they can tell their children and enrich something called a legend. 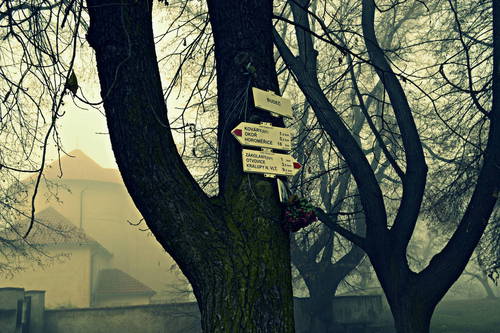 According to the legend later Prince Wenceslas learned at Budeč and Budeč is also connected with mythical figures of Krok and his daughters. Facts tell us that during the 11th century there was built a church and already in 10th century Budeč belonged to the most important residences of Přemyslid dynasty. Around 900 A.D. Prince Spytihněv I. built here rotunda of St Peter. 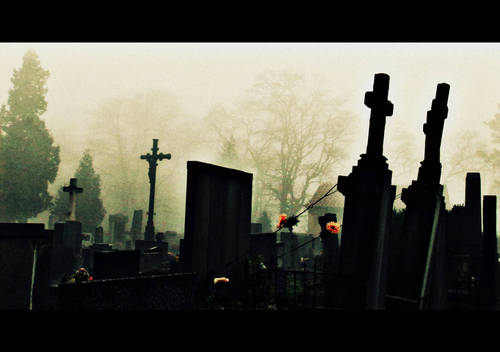 And How It Is With Budeč Today?

The sound of iron can that sharply touched a marble is well-known. Graveyard. Our fast walk gave us first a uncertain look at the top of church’s tower and at the cone-shaped rotunda. A massive iron gate creaked and two women carried out their first morning assignment – they visited the graveyard. Now they hurry to their work, thus this mystic foggy place is only ours.

I stand on the hill from where I can’t see anything, but I have an amazing feeling. It’s because I stand on the ground deeply connected with the history of Czech nation, and rather than to phone with my cell or write e-mails I would like to take a look ten or eleven centuries into the past. I wonder, if our ancestors worried about rubbish like we do today, bubbles which are floating above everyone of us. No. They worried about things that Milan Kundera called “the unbearable lightness of being”. Even his novel deals with something else and in a different time, the name of it fits my feelings. 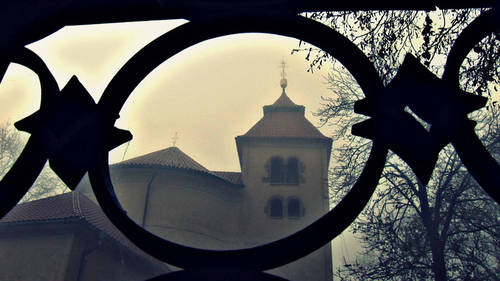 With a camcorder and with an admiration of one of the oldest functional buildings in our country I walk around the building. I have read about fortifications in its surroundings and I try to recognize it in terrain. Circular structure has 8 meters in diameter and most of it is originally from around the year 900 A.D. Its high tower was additionally built in the 12th century.

The interior of rotunda is accessible to visitors only in summer season when museum of Kladno arranges guided tours. A pilgrimage to Budeč is on day of Peter and Paul, patrons of the church, and on St Wenceslas day.

Come with us to see the oldest church in the Czech Republic - Budeč. Its core was built in 11th c...