The town of Beroun is with its strategic placing (distant 40 kms from Prague and 60 kms from Pilsen) an important junction of trade and production just from Middle Ages. After establishing of quick connection with the Prague (by means of the highway D5) the town is becoming the satelite town of the capital. Many people are finding a job in Prague where they are going daily.

Beroun is situated in a wonderful hilly countryside on a border of Czech Karst and Křivoklát -Region. In 1992 Beroun was declared the Town Remembrance Zone (thanks to many historical monuments). It became also an important starting-point of tourist paths to Křivoklát Forests, Caves of Koněprusy, or to the Castles of Karlštejn and Točník. The Berounka - river is flowing through the town. This river is popular with watermen spending each summer at Beroun-weir, near to vast camping-place on the left bank of Berounka. The town of Beroun is a town of sports, there are operating several soccer-clubs and especially Hockey Club HC Beroun-Bears, participant of the 1st Division of Ice-Hockey is very popular. Pot-Market, taking place every year at the beginning of September, has the importance in the region. The international music festival  ?Tallichův Beroun? is quite known as well.

HISTORY OF THE TOWN

The first notice of the town is from 1265, anyway, the place was colonized sooner. The name of Beroun is derived from the Latin name of the Italian town of Verona. The town, established probably in a period of highest medieval wave of towns-foundation in Bohemia, was abandoned and had to be new built in a period of reign of King Wenceslaus II. However, its importance

decreased after 30years´ War. In 60-ies of 19th century the limestone started to be mined and the other categories of industry developped (textile and iron industry). The importance of a town went up. During the communist era there were built big dwelling seats and industrial complexes (Iron and Rolling Works and big Cement Works in Králův Dvůr). Several surrounding communities became parts of Beroun, at that time (Králův Dvůr). However, this era influenced negatively the character of the town - several historical monuments were destroyed - big panel dwelling seats and a highway going through nearly the historical city damaged the city centre. In 1989 the town of Králův Dvůr became an independent town. The importance of an industry was suppressed. The industrial production was changed from the heavy to the light industry (new industrial zone). The traditional mining of limestone has not been limited, unfortunately. Now,the historical city is wonderful restored  and the whole town is acting in an arranged impression.

The rests of fortification: two gates (Pražská and Plzeňská). Typical point of charming square is a Gothical Church of St.Jacob. Also several houses on the square and in surrounded streets are worth to see. The other place of interest is the Cemetary Church of Annunciation of Lord and Duslova Villa (Neorennaisance building of end of 19th century - according to Architect Antonín Wiehl) ? now there is situated  the Town Gallery.

The town is surrounded by hills and forests all round. Many marked tourist trails are passing through the countryside (interest trip-points are, for instance, the castle of Karlštejn, Svatý Jan pod Skalou / St. John under the Rock, Koněprusy, Tetín, Hudlice, Nižbor). Near to the town it is situated afforested hill of Městská hora (Town´s Hill) with look-out-tower. On this hill there is  a run, where three bears are kept (originally known as the bears from TV programme for children. (bear is in sign of a town, from this reason  the town-hall is contributing the nutrition of these animals). The town is flowing through by two rivers, Berounka and Litavka. The town is therefore exposed to floodings (the last flood was in summer 2002). The water in Berounka is quite good, it is suitable for bathing. The watermen are using it often, too (anyway, attention to dangerous weir, unfortunately, it happened tragical accidents of swimmers and watermen on a weir!). 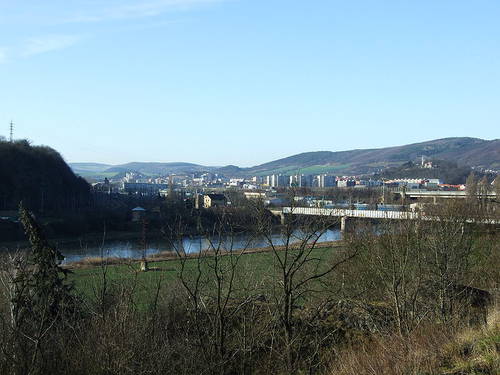