The historic name of the town is Kopidlno nad Lestinou. This name was derived from a herb called “kopidleni” that is located in surrounding forests. The first mentions of the town date back to 1322 and in 1514 it was declared a town. Owners and major figures: Schlikove, Thurn-Taxis, the Kopidlansti lords, Haugvics, Albrecht z Valdstejna, Ditrichsteins, Trckas. Unlike other medieval towns. Kopidlno wasn’t surrounded by walls. The year of 1925 was significant for the town as it experienced unseen technological jump. It was electrified and street lights were introduced. In 1936, a shelter for poor and homeless was built. The years of 1939 to 1945 were of misery and fight of the nation against Nazi occupants. In October 1939, illegal group “Czech resistance underground movement in Prague” was founded in the region of Kopidlno. 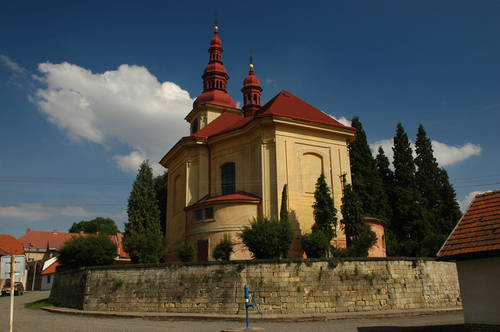 The castle is located at the southeastern corner of the square, at the beginning of expansive park near a dam on castle’s pond. In 1948, the castle was changed to a residence of SOU and OU of Kopidlno. A vast park is situated around the castle. In the 19th century a palm greenhouse was built in the park. In front of the church there is a deanery. It is a baroque building built in 1705. The St Jacob the Greater church is located on a slope near the square as well as a baroque sculptures gallery. The Gothic building was built in the 14th century. Another sights in Kopidlno are: Frantisek Hilmar cemetery monument , and St Peter’s and Paul’s in Drahoraz.

Castle Stare Hrady is a unique renaissance complex, located 8,7 km from Kopidlno. Castle Detenice is located on the borders of Bohemian Paradise; a baroque and classicist adjustment had been made on this castle (10,9 km). Loucen is a romantic castle with a extensive park – 23,2 km. Renowned old book workshop is situated in the Museum of Bookbindery in Rozdalovice ( 9,2 km). Loreta – a hill with a baroque chapel which is a place of pilgrimage: někdy some regard it as the entrance to Bohemian Paradise – 1,3 km. Memorials of Karel Havlicek Borovsky built in 1909 and Mistr Jan Hus from 1925 are located in Liban, 9,7 km from Kopidlno. The zoo in the Region of Central Bohemia you may encounter it along the 17,5 long bike trail in Chleby town.